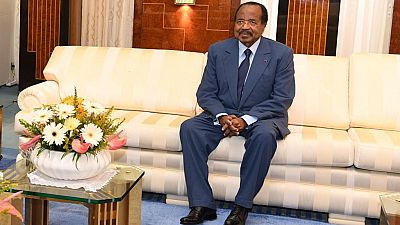 <p>Cameroon president Paul Biya for the first time in weeks appeared publicly at a time citizens continued to call for his whereabouts to be made known.</p> <p>Biya on Thursday met with the French ambassador Christophe Guilhou at the presidency. His official social media handles shared a photo of the two men.</p> <p>“Fruitful discussion with Mr Christophe Guilhou, French Ambassador to Cameroon this afternoon at the Unity Palace. Focus laid on our fight against the coronavirus pandemic in Cameroon, France and the world,” the post accompanying the tweet read.</p> <p>The president has yet to personally address Cameroonians on the pandemic whose combat and containment efforts has rested on the Prime Minister and Heath Minister.</p> <p>The French ambassador confirmed the meeting with Biya via Twitter. He confirmed the subject of discussion and stressed that France was side by side with Cameroon in the fight against the virus.</p> <p>Cameroon is Central Africa’s most impacted nation with close to 1,000 cases as of April 17. 164 recoveries have been recorded with 22 deaths so far. Cameroon is the second most-affected country after South Africa in sub-Saharan Africa.</p> <p>In early April, a month after the first case of <span class="caps">COVID</span>-19 was recorded, Cameroonians mounted a social media campaign demanding that 87-year-old Paul Biya addresses the nation like most of his peers across the continent were doing.</p> <blockquote class="twitter-tweet"><p lang="en" dir="ltr">🇨🇲🇫🇷<br /> Fruitful discussion with Mr Christophe Guilhou, French Ambassador to Cameroon this afternoon at the Unity Palace.<br /> Focus laid on our fight against the <a href="https://twitter.com/hashtag/coronavirus?src=hash&ref_src=twsrc%5Etfw">#coronavirus</a> pandemic in Cameroon, France and the world.<a href="https://twitter.com/hashtag/PaulBiya?src=hash&ref_src=twsrc%5Etfw">#PaulBiya</a><a href="https://twitter.com/hashtag/COVID19?src=hash&ref_src=twsrc%5Etfw">#COVID19</a><a href="https://twitter.com/hashtag/Covid19Cmr?src=hash&ref_src=twsrc%5Etfw">#Covid19Cmr</a><a href="https://twitter.com/hashtag/Cameroon?src=hash&ref_src=twsrc%5Etfw">#Cameroon</a> <a href="https://t.co/WUPZECaIRA">pic.twitter.com/WUPZECaIRA</a></p>— President Paul <span class="caps">BIYA</span> (@PR_Paul_BIYA) <a href="https://twitter.com/PR_Paul_BIYA/status/1250783923078139904?ref_src=twsrc%5Etfw">April 16, 2020</a></blockquote> <script async src="https://platform.twitter.com/widgets.js" charset="utf-8"></script> <p>Aside the coronavirus headache, Cameroon is also engaged in two violent conflicts, one against Boko Haram terrorists in the north, the other against English-speaking separatists in the west. The separatists have reportedly announced a ceasefire amid the virus spread.</p> <p>But there are a new set of combatants. The fighters in the new front are doctors and nurses who are woefully lacking in masks and breathing equipment. Social media posts suggested a number of them in the capital abandoning posts in protest of lack of Personal protection Equipments, <span class="caps">PPE</span>s.</p> <p>In his 37 years in power, Cameroonians have become accustomed to Biya’s long absences, mainly because of poor health, but his silence over the pandemic is raising sharp questions. He posed for the cameras after talks with the US ambassador on March 11, but did not speak to the press.</p> <p>Six days later Biya urged Cameroonians on Facebook to “respect” measures taken to combat the virus, but since then there has not been so much as a whisper from a leader who has overseen many crises since he took power in 1982.</p> <h2 style="font-size:16px;"> <span class="caps">BBC</span> story on Biya’s <span class="caps">COVID</span>-19 decree on prisoners </h2> <p>Prisoners are being released in Cameroon after President Paul Biya reduced their sentences in a decree announced on Wednesday. The decree did not say whether it was related to coronavirus but it takes effect immediately.</p> <p>It reduced death sentences to life in prison, while those serving life sentences will now serve 25 years.<br /> Prisoners jailed on terrorism-related charges and separatists are not eligible for commuted sentences. </p> <p>Others who are ineligible include those convicted for corruption, fraud, rape, torture and drug trafficking. Opposition politician Maurice Kamto wants a court to declare a power vacuum owing to the president’s silence, Bloomberg website reports.</p>