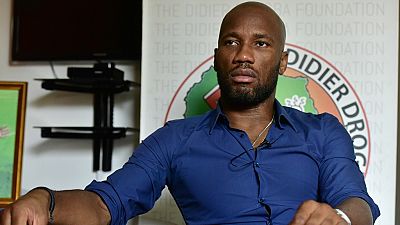 Former Ivorian international Didier Drogba has availed his private hospital for use as a government coronavirus facility, according to reports. The news was also posted on a Facebook page called Fans de Didier Drogba.

The hospital in question, located in the city of Abidjan, is named after Ivory Coast footballer Laurent Pokou, who died in 2016.

The head of Abidjan’s regional council, Vincent Toh Bi Irie, thanked Drogba for the gesture which he described as “patriotic” stressing that facility will be very useful in the fight against the virus once it is functional.

The government recently announced that 13 hospitals in Abidjan and 45 in the country will be used as COVID-19 centers. Since March 11, when the index case was reported in the West African country, the current case file stands at 574 cases, 85 recoveries and five deaths.

Drogba had been in the news weeks back when he called out two French scientists for suggesting that COVID-19 vaccine trials must start in Africa. He was joined by Cameroon’s Samuel Eto’o setting off a social media backlash on the scientists.

The World Health Organization, WHO, Director-General, Tedros Adhanom Ghebreyesus in responding to the scientists described their views as appalling and stressed that Africa will not be used as a vaccine testing ground.

In 2013, the Didier Drogba Foundation announced plans to build five hospitals across the West African country. The foundation’s focus for the facilities to specialize in children and women’s health spread throughout the country.

The announcement was made by the foundation’s secretary Guy Roland Tanoh, who told sports outlet SueprSport that the projects were to be funded by the organization’s London galas and Drogba’s personal contributions.

“The gala held in London helped us raise $ 2 billion CFA francs ($4 million),” Tanoh said. “The other 500 million francs ($1 million) will no longer be a problem to see this project come to reality, which has been Drogba’s greatest heart desire,” he is quoted to have said at the time.

Drogba first announced his plan to build a hospital in the city of Abidjan in 2009 using his entire £3 million ($4.5 million) fee from an endorsement deal with Pepsi.

But instead of building one big hospital “that may be difficult for many people to reach,” it was decided to be more practical to build five smaller clinics spread throughout the country, including one at the original Abidjan site.

First he helped end the country’s civil war and now he’s building hospitals all over the place. Plus he scores goals. If all that isn’t deserving of a sainthood, I don’t know what is.