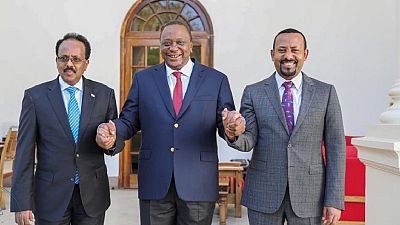 Kenya has sought Ethiopian contribution to resolve issues along its common border with Somalia. The rift recently resulted in Kenya warning her neighbour to desist from acts that bordered on threatening its territorial integrity.

Fred Mataing’i posted on Twitter that they: “held substantive talks … on Kenya’s desire for more avenues of collaboration to tackle endemic issues along the Kenya-Somalia border with the view to enhancing regional stability.”

Abiy is also a close friend of the administration in Somalia. He has hosted the Somali leader on a number of occasions and has attempted mediation of a maritime rift between the two neighbours. The case is to be decided by the International Court of Justice later this year.

It is Matiang’i‘s second high profile visit within the region where he was representing Kenyatta. He had over the weekend been in Mogadishu where he met with Somali president Mohamed Abdullahi Farmaajo.

The meeting came after a phone conversation between Kenyatta and Farmaajo last week, during which the two agreed to deescalate tensions. Kenya’s warning to Somalia was connected to armed inroads by Somali federal forces into Kenya’s Mandera county.

The Somali forces were engaging with forces of the regional Jubbaland forces when the said incursions into Kenyan territory were recorded.

Representing H.E. President Uhuru Kenyatta, we've held substantive talks with the Prime Minister of Ethiopia AbiyAhmedAli on Kenya's desire for more avenues of collaboration to tackle endemic issues along the Kenya-Somalia border with a view to enhancing regional stability. pic.twitter.com/jZEBfukxOH