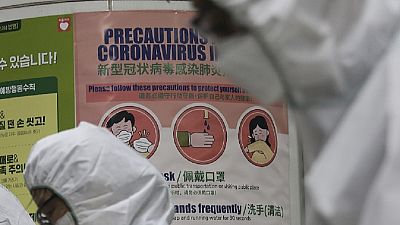 A Thai national suspected of having coronavirus has escaped from a hospital in Zimbabwe’s capital Harare, state-owned Herald newspaper reported on Monday.

The outlet in a tweet said the patient had escaped from the Wilkins Infections Disease Hospital where he was scheduled to undergo testing, “authorities are looking for the Thai national,” the newspaper added.

The escapee is reported to have been referred to the Wilkins Hospital from a local hospital where he had reported sick. The facility hosts Zimbabwe’s coronavirus isolation center.

The southern African country has no confirmed case of the deadly virus. Neighbouring South Africa as at March 9 had recorded seven cases. It is the only country in the region to be affected.

A suspected coronavirus patient has escaped from Wilkins Hospital before being tested. Authorities are looking for the Thai national

Zimbabweans on social media have been expressing dismay at how authorities could look on for a potentially high-risk patient to escape.

Most international airports across Africa are screening passengers especially those coming from countries with high infection rates of the disease. DRC for example announced that it was compulsorily quarantining nationals from China, France, Italy and Germany.

Sub-Sahara Africa aside South Africa has cases in Senegal, Nigeria, Togo and Cameroon. Over in north Africa, only Libya has been lucky to escape the virus. East Africa is the only African bloc to escape infection so far.