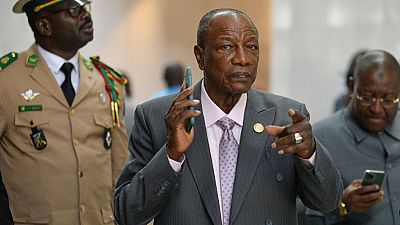 Guinea’s president Alpha Condé on Friday announced a ‘slight postponement’ of Sunday’s scheduled referendum on a new constitution and legislative elections, following months of deadly protests against what the opposition sees as a manoeuvre to stay in power.

“It is out of national and sub-regional responsibility that we accepted a slight postponement of the election date,” Condé said on national television.

“We must always remain within the framework of ECOWAS (Economic Community of West African States) and the African Union,” he explained.

“This is neither a capitulation nor a retreat,” added Mr Condé, assuring that “the people of Guinea will freely express their choice through the referendum and freely choose their deputies,” without setting a new date.

Before this surprise postponement, Guineans were expected to vote on Sunday on a new constitution, defended as “modern” by the head of state. It would enshrine gender equality, prohibit female circumcision and the marriage of minors.

It would ensure a fairer distribution of wealth in favour of young people and the poor, he said.

The opposition does not believe a word of it. It sees the plan as a gimmick of a former historical opposition politician who, at nearly 82, has become an autocrat and like many other African leaders before him, intends to bend the constitution to his desire to run for a third term at the end of the year when the current one expires.

Since mid-October, the mobilization against Condé has led to mass demonstrations, deadly city days that impact on the economy of one of the world’s poorest countries, and serious episodes of police brutality.

At least 30 civilians and a gendarme have been killed since then.

These tensions, the opposition’s calls to not only boycott but also prevent the referendum and legislative elections, which were also scheduled for Sunday, as well as attacks on polling stations and voting materials in recent days, have heightened fears of violence in a country that is accustomed to demonstrations and brutal repression.

The army was put on alert as early as Tuesday.

Years of political animosity, the suspicions weighing on the vote, as well as the maintenance of this election against all odds despite the boycott and the calls of the international community to do everything possible to involve the opposition, had given way to a campaign far removed from a peaceful democratic exercise.

Tangible signs of this campaign were rare this week in the capital Conakry. Signs bearing slogans such as “yes to equality” or “yes to investing in youth” overlooked car-clogged arteries. But few or no public gatherings were in sight.

The draft constitution limits the number of presidential terms to two. The outgoing head of state already has two. But the opposition fears that the adoption of a new constitution would allow him to reset the counter to zero.

“What’s wrong with that?” asks Sékou Condé, an executive of the presidential party. Most Guineans want President Condé to stay to develop the country, he assured AFP.

Condé has so far been opaque on his intentions. It is his party that will decide his future and Guineans may as well say no to the new constitution, he insisted.

But “why in Guinea it would be impossible to serve three terms” he asked this week in the French daily Le Figaro.

The doubts expressed by the international community about the credibility of the vote have followed one after the other.

The International Organization of the Francophonie (OIF) this week said described as “problematic” nearly 2.5 million names of voters on the lists, with duplicates and the presence of deceased persons.

The European Union questioned “the credibility of the forthcoming elections”, in particular because of the “lack of transparency”.

On Thursday, the Community of West African States cancelled at the last minute a mission of several African Heads of State that was scheduled to travel to Guinea. It announced that it would not deploy observers because of the potential risks involved. The African Union followed suit on Friday by recalling its observers.

Condé “will in any case get the result he wants,” deplored opposition leader Cellou Dalein Diallo, who said most Guineans are against the referendum and predicted a strong abstention.