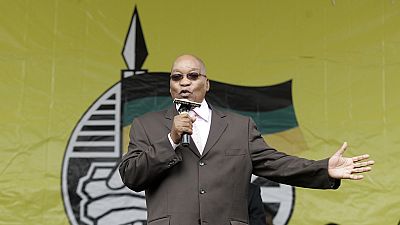 A court in South Africa has issued an arrest warrant for former president Jacob Zuma after he failed to appear for a corruption trial, claiming that he is ill.

The National Prosecuting Authority requested the warrant, the South African Broadcasting Corporation reported. The warrant does not come into effect until the case resumes on May 6.

Reports have said Zuma is in Cuba seeking treatment. The NPA requested Zuma’s medical records as evidence of his claim, the state broadcaster reported.

State advocate Billy Downer told the Pietermaritzburg High Court that Zuma’s team has said he will be out of the country for treatment until mid-March, local media reported.

Zuma’s legal team asserted that the former president had two operations in early January before going abroad. But the judge questioned a letter from a military hospital in the capital, Pretoria, explaining Zuma’s absence, noting it had no date.

Zuma, whose past court appearances were marked by defiant speeches and singing and dancing for crowds of supporters, has faded into the background as his legal challenges to the corruption charges have faltered.

Zuma’s arguments against being tried

A court late last year dismissed Zuma’s attempt to appeal a ruling that cleared the way for him to be prosecuted. He is accused of receiving bribes from French arms manufacturer Thales through his former financial adviser Schabir Shaik, who was convicted of fraud and corruption in 2005.

Zuma denies charges of corruption, money laundering and racketeering related to the controversial 1999 arms deal when he was deputy president. He has alleged his case was prejudiced by lengthy delays in bringing the matter to trial. He also has alleged political interference.

The charges were thrown out by prosecutors nearly a decade ago in a contentious decision that opened the way for Zuma to become president. Prosecutors returned to the case after his rocky presidency.

Zuma, who took office in 2009, resigned in 2018 under pressure from the ruling African National Congress after widespread public outcry over separate allegations of mismanagement and corruption that severely affected state-owned companies.

The corruption is estimated to have cost South Africa billions of dollars.

South Africa and its economy, the most developed in sub-Saharan Africa, have continued to struggle to recover under Zuma’s successor, President Cyril Ramaphosa, who has apologized for the past mismanagement and vowed reforms that some critics have said are long in coming.

The scandals sparked outrage and have badly hurt the reputation of the ANC, which has ruled South Africa since the end of the harsh system of white minority rule known as apartheid in 1994.