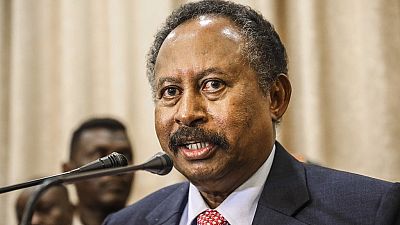 <p><strong>The United Nations has urged the United States to remove Sudan from a list of state sponsors of terrorism, arguing that the international community would “pay a terrible price” if it fails to help rebuild the African country’s dilapidated economy as it transitions to civilian rule.</strong></p> <p>“The story of Sudan in year 2020 is not the story of the previous government,” United Nations Development Programme (<span class="caps">UNDP</span>) administrator Achim Steiner told <span class="caps">AFP</span> in an interview during his visit to Sudan this week.</p> <p>“It is the story in which waiting for too long to actually step in and support this (development) process may have a terrible price.”</p> <h2 style="font-size:16px;">Economic challenges</h2> <p>More than a year after the start of a nationwide protest movement that led to the ouster of longtime ruler Omar al-Bashir last April, Sudan faces a series of challenges driven by an economic crisis.</p> <p>Years of recession were a key trigger for the protest movement against Bashir’s 30-year-old autocratic regime.</p> <p>Months after he was ousted, the economy remains burdened with foreign debt of more than $60 billion, inflation of about 60 percent, soaring unemployment and chronic shortage of fuel and foreign currency.</p> <p>But these challenges are exactly the opportunity for the international community to step in and help Sudan, said Steiner, the first <span class="caps">UNDP</span> chief to ever visit the northeast African country.</p> <p>“Here is a country in which the youth, and particularly the women, have not only managed to pull off a peaceful revolution in large part, but they actually have an agenda to build a developmental state,” Steiner said.</p> <p>“The international community must recognise how unusual and how extraordinarily helpful this is in a region that is otherwise providing more and more worrying news about political instability and about extremism.”</p> <h2 style="font-size:16px;">Support Sudan</h2> <p>Sudanese officials say there has been a lacklustre response from the international community to the country’s reform process led by new Prime Minister Abdalla Hamdok, a well-respected economist.</p> <p>Most blame Washington’s continued blacklisting of Sudan as a “state sponsor of terrorism”, which makes international banking cumbersome and keeps overseas investors away.</p> <p>In October 2017, Washington lifted its 20-year-old trade embargo imposed on Sudan, but kept the country on the terrorism blacklist along with Iran, Syria and North Korea.</p> <p>Removing Sudan from the blacklist is likely to take time, with Washington seeking assurances that Bashir’s regime is being fully dismantled.</p> <p>Steiner said that for many, Sudan’s blacklisting was no longer a crucial issue and he urged the US Congress to expedite the delisting.</p> <p>He said the international community was taking Sudan “a little bit for granted”.</p> <p>“We are in danger of forgetting that Sudan… is actually a story that is more hopeful than it has been for 30 years. And are we missing an opportunity to actually lean in and support it?” said Steiner.</p> <p>“We as <span class="caps">UNDP</span>… are certainly committed to increase our engagement. This is a win-win proposition.”</p> <h2 style="font-size:16px;">Call to international institutions</h2> <p>Global financial institutions demand that Sudan launch widespread reforms to revive its economy, including cutting subsidies, which according to Steiner, should be done gradually.</p> <p>“Our role and that of the World Bank, the <span class="caps">IMF</span>… is to come up with wiser and smarter advice than simply saying to Sudan ‘Well, you are failing in your reform if you don’t do x or y’,” he said.</p> <p>Steiner lauded the new authorities for engaging in talks with rebel groups for ending conflicts in Darfur, Blue Nile and South Kordofan — regions riven by fighting under Bashir.</p> <p>Over the years, hundreds of thousands have been killed and millions displaced in fighting between Bashir’s forces and rebels in these regions.</p> <p>Steiner said it was up to the Sudanese people to decide what kind of society they now wanted, but they needed the help of the international community to build that society.</p> <p>“When you are on your knees, when a previous government has raided the coffers of a nation for decades, you have to look to the international community to also be part of that recovery effort, and I think this is the story that is unfolding before our eyes in Sudan today,” he said.</p> <p><strong><em><span class="caps">AFP</span></em></strong></p>