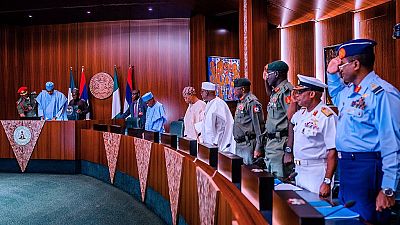 Lawmakers in Nigeria’s lower chamber of parliament have called on the top brass of the army to resign, failure for which the president should relieve them of their posts.

Members of the House of Representatives on Wednesday agreed at their plenary sitting to make the demand after debating over rising insecurity across the country.

“Following a two-hour debate on how to tackle the insecurity nationwide, the House adopted a motion urging the Service Chiefs to resign, failing which they should be sacked by President Buhari,” the official account of the chamber said in a tweet.

“They also resolved to have a meeting between the leadership of the National Assembly, the Executive and the Armed Forces. A minute silence was observed for the victims of insurgency and insecurity in the country,” they added.

“I was taken aback by what is happening in the north-west and other parts of the country. During our campaigns, we knew about the Boko Haram. What is coming now is surprising,” Buhari said, according to local media portal, Vanguard. “It is not ethnicity or religion, rather it is one evil plan against the country.”

Meanwhile, Buhari called a National Security meeting today to discuss the security situation in Africa’s most populous nation. The meeting was ongoing at the time of filing this report.