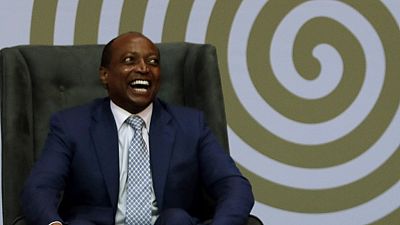 <p>South African billionaire businessman caught in the middle of an expression of continental love has beaten a retreat over a controversial comment he made in Davos, Switzerland last week.</p> <p>Patrice Motsepe through the Motsepe Foundation issued a statement apologizing for his ‘Africa loves America, Africa loves Trump,’ comment when he met with US president Donald Trump on the sidelines of the World Economic Forum, <span class="caps">WEF</span>.</p> <p>According to the statement, Motsepe said he had come to the realization that it was not his place to speak on behalf of a continent in the manner in which he did. </p> <p>He was captured on camera telling Trump: “Africa loves America. Africa loves you. It’s very, very important. We want America to do well. We want you to do well. The success of America is the success of the rest of the world.”</p> <p>The video immediately went viral across South Africa and other parts of Africa <a href="https://twitter.com/africanews/status/1220728340862074881">eliciting varied comments</a> from the political, social, funny, critical and even bizarre slants. He had severally been described on Twitter as a spokesperson for Africa.</p> <blockquote class="twitter-tweet"><p lang="en" dir="ltr">Patrice Motsepe impressing Trump with lies <a href="https://t.co/I4C33XH3DP">pic.twitter.com/I4C33XH3DP</a></p>— Khutšo🇿🇦 (@khutso000) <a href="https://twitter.com/khutso000/status/1220555171660476416?ref_src=twsrc%5Etfw">January 24, 2020</a></blockquote> <script async src="https://platform.twitter.com/widgets.js" charset="utf-8"></script> <h2 style="font-size:16px;"> Release: Statement by Dr Patrice Motsepe on his remarks to President Donald Trump at Davos dinner </h2> <p>I’m aware of the lively, diverse and at times emotional debate in the global media and on social media relating to my remarks to President Donald Trump at the dinner in Davos during the World Economic Forum.</p> <p>The debate also exposed me to the views of Africans who disagreed with my remarks. I have a duty to listen to these differing views and would like to apologise. I do not have the right to speak on behalf of anybody except myself. </p> <p>As a global philanthropist and business leader, I have for many decades, in South Africa and on the African continent, worked to bring together and unite people of different races, ethnic groups and members of different religious and faith-based organisations. </p> <p>I’ve worked with political, business, societal and other leaders whose views and policies I do not share and will continue to do so in Africa and globally.</p> <p>My remarks at the dinner with President Donald Trump were partly aimed at encouraging discussions between the Trump Administration and African political and business leaders, particularly in the context of the increasing feedback from certain American political and business leaders that South Africa and some African countries are anti-America and its political leadership. </p> <p>This perception has had an impact on our ability to attract foreign investments and create jobs.</p> <p>Africa’s current population is 1.35 billion and it has the fastest growing youth (aged between 15 and 24) and total population in the world. </p> <p>The unemployment rate in the 8 largest African economies measured by <span class="caps">GDP</span> is approximately 18%. South Africa which has the most industrialised and diverse economy in Africa has an unemployment rate of 29.1% and a youth (aged between 15 and 24) unemployment rate of 51%.</p> <p>Africa has to create approximately 8 million new jobs for the youth every year and South Africa has to create in excess of 500 000 new jobs for the youth each year. </p> <p>In order to do this and to provide skills and expertise and improve the living conditions and standards of living of millions of Africans, Africa will have to create partnerships and increase trade and investment ties between Africa and America and between Africa and other parts of the world.</p> <p>A successful, prosperous and growing Africa is good and beneficial not only to the 1.35 billion people living in Africa but for the world.</p> <p>Africa and America to a very large extent, share common values and principles and have greater mutual interest than the issues or policies on which they disagree or have different views.</p> <p>It is in the interest of South Africa and the rest of the African continent to build mutually beneficial socio-political, trade, investment and cultural ties between the economies and people of Africa and America and Africa and the world.</p> <p>I am committed to continue making a humble contribution in this regard.</p>

The debate also exposed me to the views of Africans who disagreed with my remarks. I have a duty to listen to these differing views and would like to apologise. I do not have the right to speak on behalf of anybody except myself.