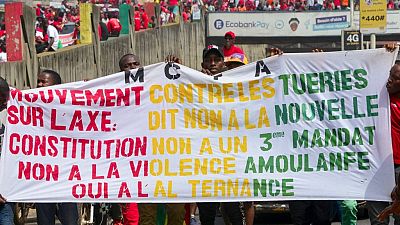 Guinea’s economy has been badly hit by anti-government protests that have lasted months, and experts are worried that the mining sector which sustains livelihoods of many will soon be affected.

The protesters’ bone of contention? Proposed changes to the constitution that would allow president Alpha Conde seek a third term in office.

The National Front for the Defence of the Constitution (FNDC), an alliance of opposition groups behind the protests has called for unlimited, nonviolent, protests to stop Conde.

The economy is paralysed, people can't market their goods.

Businesses have shut and protesters have rained rocks on police stations, looted property, blocked major roads and reportedly stopped trains in their tracks, severely hampering the easy flow of goods across the country.

That means rising prices for the population in what is already one of the world’s poorest countries despite being rich in natural resources.

“The clearest impact has been the decrease of purchasing power,” he said.

Mariama Barry, a supermarket owner in suburban Conakry, said profits had fallen compared to a few months ago.

“Everyone is afraid to stock shelves because we don’t know what’s going to happen tomorrow,” she said, adding that she also employs security guards now.

Zeze Guilavogui, a lorry driver, said that transport of fruit and vegetables from the interior had stopped.

“It’s better not to go to Conakry than to have your goods looted,” he said.

FNDC has urged “mining companies, banks, factories, gas stations and other companies” to suspend activities, a nightmare scenario for Conde, 81, who has been trying to attract foreign investors and diversify the economy.

He told French media in October that the economy had always been the priority during his decade in power.

“We used to import everything,” he said. “Now, we’re producing more and more agricultural products, we export cement”.

At least 26 civilians and one gendarme have died in the unrest to date, according to an AFP tally, and more protests are expected. The government did not respond to questions from AFP.

State revenue from the sector was around $500 million in 2017, according to the Natural Resource Governance Institute, a think tank.

The FNDC’s explicit mention of the mining industry amounts to “a written warning”, said Herve Lado, a Conakry-based analyst for the institute, although there had been no reports of big disruptions for now.

“When there are political or security issues, the government makes sure that its main source of revenue is preserved,” he told AFP.

But the FNDC says the government won’t be able to protect mining forever.

In the meantime, union involvement will determine the economic damage to come, Lado said.

“If there are many other trade unions joining the movement, I think they will try many, many actions against mining companies,” he said.

FNDC spokesman Abdouramane Sanoh told AFP it was clear the protests were having an impact on the economy.

“The economy is paralysed, people can’t market their goods,” he said, quickly adding however that drawing international mediation, not crippling the economy, had been the main objective.

Boubacar Barry said the economic and political situation is deeply unsettling for anyone thinking of placing money in the country.

“None of this reassures foreign investors”, he said.