A blow and a surprise to the British royal family.

Prince Harry and his wife Meghan Markle announced Wednesday that they were stepping back as senior members of the Royal Family.

The Duke and Duchess of Sussex say they will balance their time between the UK and North America.

They're perfectly at liberty to move away. But I think it's not being done in a very tactful, nice, kind, thought out (way).

“I’m a great royalist, and I think that, you know, sometimes you have to do some of the things you don’t want. They’re perfectly at liberty to move away. But I think it’s not being done in a very tactful, nice, kind, thought out (way)”, said Angela Levin, Royal biographer and author of ‘‘Harry: Conversations with the Prince’‘.

In a statement to their Instagram page, the royal couple said they intend to work towards financial independence, while continuing to fully support Queen Elizabeth II. The couple also spoke of their difficulty in coping with media pressure.

But in a press release, the Royal Family stated that discussions with the Royal Couple were at an early stage.

‘We understand their desire to take a different approach, but these are complicated issues that will take time to work through,” the Royal Family said. 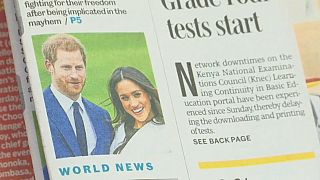