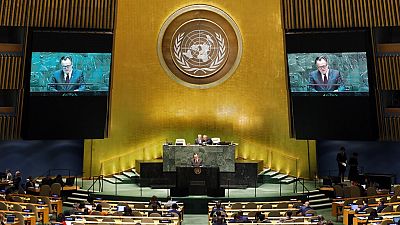 Zimbabwe was the only African country that voted against a United Nations General Assembly, UNGA, resolution on the Myanmar persecution of Rohingya Muslims.

The resolution, “Situation of Rohingya Muslims and Other Minorities in Myanmar” was however passed overwhelmingly with 134 countries in favour as against nine in opposition and 28 abstentions.

Others who voted against were: Belarus, Cambodia, China, Lao, Myanmar, Philippines, Russia and Vietnam. A number of African countries also abstained from the vote, amongst others: Cameroon, Burundi, Eritrea, Kenya, Namibia, Lesotho and Zambia.

In November last year, The Gambia filed a case in the International Court of Justice, ICJ, against Myanmar. The case was filed on behalf of the Organization of Islamic Cooperation, OIC.

Myanmar’s military began a harsh counterinsurgency campaign against the Rohingya in August 2017 in response to an insurgent attack. More than 700,000 Rohingya fled to neighboring Bangladesh to escape what has been called an ethnic cleansing campaign involving mass rapes, killings and burning of their homes.

The head of a U.N. fact-finding mission on Myanmar warned in October last year that “there is a serious risk of genocide recurring.” The mission also said in its final report in September that Myanmar should be held responsible in international legal forums for alleged genocide against the Rohingya.

The case filed at the International Court of Justice, also known as the world court, alleges that Myanmar’s campaign against the Rohingya includes “killing, causing serious bodily and mental harm…

“… inflicting conditions that are calculated to bring about physical destruction, imposing measures to prevent births, and forcible transfers, are genocidal in character because they are intended to destroy the Rohingya group in whole or in part.”