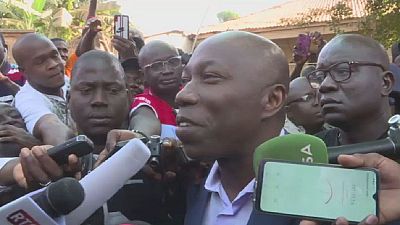 Losing candidates to reject results has become something of a “democratic culture” across much of Africa. In 2019 alone, losing candidates in about a half dozen countries rejected poll outcomes.

The latest installment is from West African country of Guinea-Bissau where an opposition presidential candidate defeated the ruling party’s aspirant in a poll run-off.

The runoff, a battle of two former Prime Ministers saw Umaro Sissoco Embalo, proclaimed the winner with 53.55% of the votes cast.

The losing candidate who run on the ticket of the ruling party, the PAIGC, Domingos Simões Pereira, denounced what he said was electoral “fraud.”

According to the official results released by the National Electoral Commission, Simões Pereira came second with 46.45%, 7 points less than Embalo the winner.

Incidentally, the PAIGC candidate came tops in the first round of voting in November 2019. He had secure 40.13% of the votes far ahead of Umaro Sissoco, with 27.65%.

Political watchers indicate that these elections took place in a fair and transparent conditions. President-elect Sissoco Embalo says he is ready to work with the ruling party to restore political stability in the country.

He takes over from Jose Mario-Vaz who came a distant third in the first round, he backed Sissoco in the runoff. Mario-Vaz wept as he delivered his final address in the New Year tasking all parties to do all it takes to return the country to durable stability.

Countries that has seen opposition challenge results in recent times include: Democratic Republic of Congo, Malawi, Botswana, Namibia, Nigeria and Mozambique. In the case of Senegal, opposition aspirants alleged fraud but refused to petition the courts.

Across Africa, Kenya is the only country whose top court annulled an election in 2017. The opposition National Super Alliance, NASA, led by Raila Odinga got the David Maraga-led court to cancel Uhuru Kenyatta’s second term win and call for rerun, NASA eventually boycotted the vote.