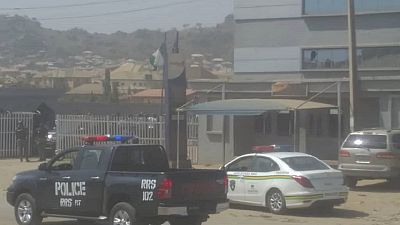 A group of robbers stormed a bank in a suburb of Nigeria’s capital Abuja on Saturday but before they could finish their ‘transaction’ and flee, soldiers and police arrived at the scene.

Local media outlets reported that a standoff ensued at Mpape in Abuja between a gang and the security forces who were holed up in a branch of First Bank.

The security team were seen in social media posts trying to use other means to gain access into the building including options of entering through the roof.

Reports said a robber attempted to force his way out and in the process got shot before he returned into the premises. Some of the robbers are also reported to have been apprehended.

It is not known as yet how many they were in all. The bank in a statement said all employees and customers caught up in the incident were safe. It also thanksed the security forces for their swift reaction.

The immediate response by the police and military is very commendable and we truly appreciate them for their doggedness and commitment.
Thank you.

UPDATE: Joint team of police, army, making efforts to find alternate means of entering into FirstBankngr to arrest other members of the robbery team pic.twitter.com/djDZRZRvFE