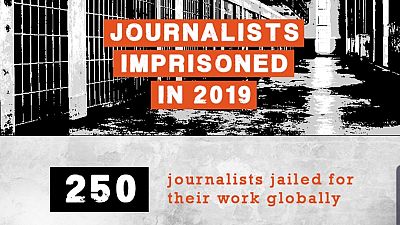 For the year 2019, Egypt and Eritrea maintained the record of being Africa’s worst jailer of journalists, a press rights group, Committee for the Protection of Journalists, CPJ reported last week.

Egypt topped for the Middle East and North Africa, MENA, region whiles Eritrea was leader for the Sub-Saharan Africa region.

CPJ releases the global list every year highlighting the plight of journalists languishing in jails for different reasons. CPJ’s Prison Census has 250 journalists behind bars for a range of offences including fake news.

Of 39 journalists jailed in sub-Saharan Africa, the bulk remain in Eritrea, where most have not been heard from for nearly two decades; Cameroon was second worst. 92% of those jailed were male whiles females made up the remaining 8%.

While the number of journalists in prison in that region is broadly steady with last year, CPJ finds that freedom of expression is backsliding in two of the most populous countries, Ethiopia and Nigeria, which does not bode well for journalists.

Vietnam remained Asia’s second-worst jailer after China, with 12 behind bars. In all of the Americas, three journalists were jailed.

Other findings from CPJ’s annual census include: