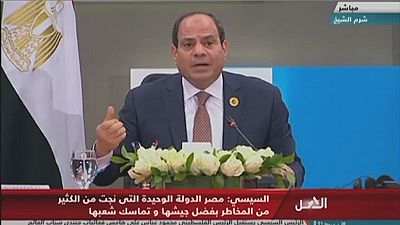 President Abdel-Fattah el-Sissi said in televised comments that the Government of National Accord “is not able to have a free and real will because they have been taken hostage by armed and terrorist militias there.”

The GNA is backed by Egypt’s regional rivals Turkey and Qatar and Egypt’s relations with the two countries have been strained since 2013.

That’s when el-Sissi, as defense minister, led the military overthrow of elected but divisive Islamist President Muhammad Morsi amid mass protests against his brief rule. Morsi was a member of the Muslim Brotherhood.

The Tripoli-based government is supported by a Libyan affiliate of the Muslim Brotherhood group, which Cairo designated as a terrorist organization in 2013. Turkey and Qatar are also staunch backers of the Brotherhood.

El-Sissi said the Libyan conflict has posed a threat to Egypt’s national security because militants and weapons spill over the border into Egypt.

He said it had been a priority for Egypt to directly interfere in Libya “but did not take this step to maintain the relationship and brotherhood with the Libyan people.” There was no immediate comment from the Tripoli authorities.

Last week, the Egyptian president said a comprehensive political solution for the Libyan conflict would be achieved in the coming months that would put an end to a “terrorist hotbed that pushes militants and weapons to (Libya’s) neighboring countries including Egypt.”

Libya descended into chaos after the 2011 civil war that ousted and killed long-time dictator Moammar Gadhafi. The turmoil that followed Gadhafi’s death enabled the rise of Islamic militants.

The country was divided into two parts, a weak U.N.-supported administration in Tripoli and a rival government in the east aligned with the self-styled Libyan National Army, led by Gen. Khalifa Hifter.

Hafter, who has modeled himself after el-Sissi, has for months been fighting an array of militias allied with the Tripoli authorities to wrest control of the capital.

He is backed by the United Arab Emirates and Egypt, as well as France and Russia, while the Tripoli-based government receives aid from Turkey, Qatar and Italy.

On Saturday, Egypt’s parliament Speaker Ali Abdel-Al said Egypt recognizes the Libyan legislature as “the sole legitimate body representing the Libyan people,” according to the MENA news agency. He said the Egyptian parliament backs Hifter’s forces in their “fighting against terrorism.”

Libya’s parliament is affiliated with the government based in the country’s east and has opposed the U.N.-supported government in Tripoli.

Abdel-Al did not say whether the government of el-Sissi decided to rescind its recognition of the Tripoli-based government. Multiple calls to the country’s presidency and Foreign Ministry went unanswered.

The Libyan commander Thursday declared a “final” and decisive battle for Tripoli, unleashing heavy clashes on the southern reaches of the city in the past two days against the Tripoli-based militias.

Greece, Egypt and Cyprus, which lie between the two geographically, have denounced the deal as being contrary to international law, and Greece expelled the Libyan ambassador last week over the issue.