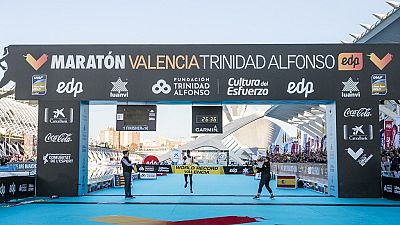 “World cross champion, 10,000m world champion and now the world record. What a year it has been.”

“I can’t believe it! I knew Valencia was going to be a really fast course. So to get to achieve what we came here for is something really special.”

Starting out behind compatriots Stephen Kissa and Abdallah Mande, a determined Cheptegei reached 6km in 16:02 and 7km in 18:42. He forged on, reaching 8km in 21:37, when it became clear that the world record was within reach.

Uganda’s joshuacheptege1 has set a new record after winning the 10km road race in Valencia, Spain on Sunday morning.

The 23-year-old smashed the previous record set in 2010 by Kenya’s Leonard Komon by 6 seconds.#KawowoUpdateshttps://t.co/xFybWbzStU

The 23-year old is also the reigning 10,000m champion- a crown he won in Doha in October, having won the 10km cross country world title in Denmark in March.

It’s a special moment to crown the year with yet another important achievement
What a year 2019 to end with a 10km #worldrecord
Special credit to my family, #pacemakers
And all my training partners
What a moment for #Kapchorwa, #Ugandaand the rest of the #World