All options are open: France reviews counter-terrorism strategy in Sahel 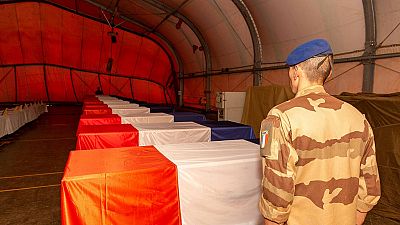 French President Emmanuel Macron told his country military leaders to consider all options as it seeks to review its operations against Islamist militants in West Africa.

Macron’s first public remarks since 13 French soldiers died during a combat mission in Mali included an earnest plea for his international allies to do more.

France, a former colonial power, is the only Western country with a significant military presence waging counter-insurgency operations in Mali and the wider Sahel region south of the Sahara desert.

The 13 French soldiers were killed in Mali on Monday when two helicopters collided in the dark after being called in to provide air support during a combat mission to track down a band of Islamic State fighters.

Islamic State said on Thursday that its West African branch had caused the collision, but it did not provide any evidence for the claim.

The French government has faced criticism at home that its troops are bogged down, while critical voices in the region have increasingly scorned Paris for failing to restore stability and anti-French sentiment has grown.

Thirty eight French troops have been killed in the West African Sahel since France sent troops to Mali in 2013.

Macron invited those seeking to understand the cost of France’s mission in the Sahel should witness a ceremony to honour the dead soldiers. The country will be mourning its heaviest single loss of troops for nearly four decades.

“France is acting in the Sahel on everyone’s behalf,” an emotional Macron told a news conference with NATO General-Secretary Jens Stoltenberg.

“Our mission there is important. Nevertheless, the situation we face compels me today to examine all our strategic options.”

Macron said he had told his government and top military leaders to look hard at France’s operations in the region, adding, “I told them all options are open”.

He gave no indication what those options were. However, French officials have ruled out withdrawing its 4,500-strong force from the region, fearing this could lead to even more chaos.

As France mourns the dead commandos, Macron wants to incorporate more European allies into operations and to ensure local troops are better trained and equipped.

French officials have also bemoaned the fact peace accords agreed in Mali in 2015 have still not been implemented and that the political will power to implement them is missing.

Foreign Minister Jean-Yves Le Drian told lawmakers there was a need for more political action in Mali and a common desire to defeat terrorism, adding that was also the case for neighbouring Burkina Faso.

Despite French troops, 15,000 U.N. peacekeepers in Mali and thousands of pan-regional forces, Islamist militants have strengthened their foothold across the arid Sahel region, making large swathes of territory ungovernable and stoking ethnic violence, especially in Mali and Burkina Faso.

Macron’s government denies it is bogged down in an intractable conflict. But Monday’s deaths have provoked renewed public comparisons with the United States’ drawn-out military involvement in Afghanistan.

France has complained to European allies that it is bearing the brunt of a counter-terrorism operation that benefits all Europe. It hopes to persuade them quickly to send special forces to the region to back up local troops, Le Drian said.