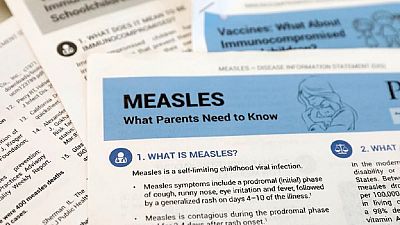 The World Health Organization says cases of measles are continuing to spike globally, with multiple large outbreaks being reported across Africa, Europe, Latin America and the Middle East.

In an update on Wednesday, the U.N. health agency said Congo has reported more than 250,000 suspected cases this year, including 5,110 deaths.

The figures mean that measles, which is one of the six childhood killer diseases, has killed more people that the Ebola outbreak that is over a year-old.

As at earlier this week, Ebola death toll had reached 2198 as against the number of cases which stood at 3301.

Positive news on the Ebola front in the DRC.
Numbers dropping- at least 10 days this month there have been no new cases.
Latest stats:
Number of cases: 3301
Number of deaths: 2198 pic.twitter.com/J7AKEZDOxi

In Europe, there have been more than 56,000 cases in Ukraine. Sizeable outbreaks have also been reported in Brazil, Bangladesh and elsewhere.

WHO noted that two large epidemics in New York are over but small outbreaks elsewhere in the U.S. continue.

Measles is among the most infectious diseases and can be prevented with two doses of vaccine.