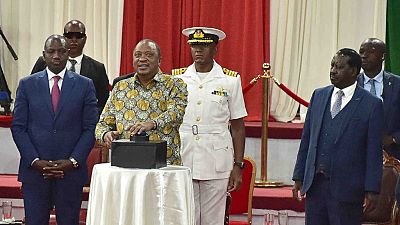 Kenya’s president and top opposition leader on Wednesday launched a report that they call a road map for unifying the country and ending deadly violence around elections.

The country has seen post-election violence in 1992, 1997, 2007 and 2017, when the Supreme Court shocked the country by nullifying the presidential election over irregularities and ordered a fresh vote, which the opposition boycotted.

The long-awaited Building Bridges Initiative was launched by President Uhuru Kenyatta and rival Raila Odinga after they shook hands last year to end a months-long political standoff in which at least 92 people were killed.

Among the report’s recommendations is creating a prime minister post, replacing the electoral commission and nearly doubling county governments’ share of the national budget from 18% to 35%.

It also takes aim at widespread corruption, saying government officials should not engage in business while in office.

The report was criticized by some observers, including those who had hoped for bolder recommendations against corruption. Anti-corruption expert John Githongo called it “muddled.”

Economist David Ndii, who was Odinga’s chief strategist during the election, called the report an “Uhuru-Raila self-preservation political project.”

This isn’t the first time Kenya has attempted to calm political violence. A truth and reconciliation commission report presented to Kenyatta in 2013 recommended prosecutions and reparations but has not been acted upon.

The commission was formed after the 2007 post-election violence in which more than 1,100 people were killed and hundreds of thousands displaced.

The new report now likely goes to Parliament, though some Kenyans argue that some of its recommendations will require a referendum.

Odinga and Kenyatta said the report should spark national debate that will lead to reforms. “These proposals … are not the end but the beginning of a much-needed debate about the new Kenya,” Odinga said.