Guinea-Bissau poll: ECOWAS has standby army to prevent a coup 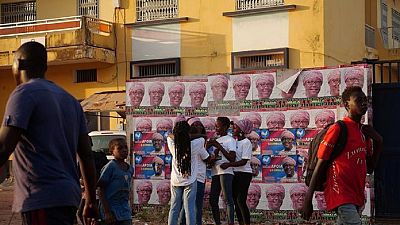 The Economic Community of West African States (ECOWAS) on Monday warned it had a standby military force poised to “re-establish order” in the event of a coup in Guinea Bissau.

The president has repeatedly clashed with parliament over who should lead the government, causing severe political deadlock and raising fears of violence.

The impoverished West African nation went to the polls in the hope of ending the impasse.

ECOWAS says its 75 election monitors saw no tampering at polling stations during the presidential election on Sunday.

Soumeylou Boubeye Maiga, a former Malian prime minister who heads the ECOWAS election observation mission in Guinea-Bissau, urged all candidates to respect the results and the legal institutions.

“This is a crucial step in the consolidation of the democratic gains of the Bissau-Guinean people,” he said.

Vaz has previoulsy said he would respect the results.

Guinea-Bissau has a long history of military coups and political assassinations since winning independence from Portugal in 1974.

Vaz is the first president in 25 years to finish his term without being ousted, and the country’s last military coup occurred in 2012.

Francis Behanzin, an ECOWAS commissioner in charge of political affairs and security, told reporters on Sunday that neighbouring countries would no longer tolerate coups in Guinea-Bissau.

“We have a standby force. We will intervene just as we have intervened elsewhere to re-establish order,” he said, citing discussions with national security forces across the region.

“There was no ballot stuffing,” said Felisberta Vaz Moura, a spokeswoman for the National Electoral Commission.

The mood was tense on voting day, which was marked by sporadic scuffles among supporters of rival political camps.

Twelve candidates in total, including Vaz, are running for president.

Provisional election results are due by Wednesday.

A second round of voting, planned for December 29, is considered highly likely given the number of candidates.