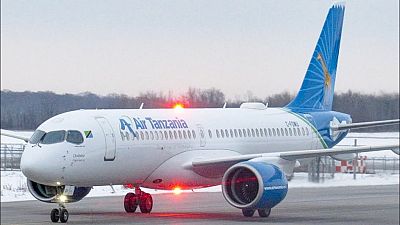 An aeroplane being delivered to Tanzania’s national airline has been impounded in Canada over a Namibian-born farmer’s $33-million compensation claim, Tanzania’s foreign minister said Saturday.

The DHC Dash 8-400 aircraft, a turboprop also known as the Bombardier Q400 which seats up to 90 people, is the second to be seized in connection with case.

In August, an Airbus 220-300 aircraft was seized in South Africa’s Johannesburg airport, after it landed on a flight from Tanzania, but was released in September.

Canada should also know that it is not the only manufacturer of planes in the world.

“The same person who went to court in South Africa, and caused the impounding of Airbus in August, went to a Canadian court,” Tanzania’s Foreign Minister Palamagamba Kabudi.

The plane, built by Canada’s De Havilland company, was due for delivery as part of a fleet expansion of the government-run Air Tanzania.

“We won in a case with this man in South Africa,” Kabudi added, speaking at a government function broadcast on state-media in Tanzania’s capital Dodoma.

“I wonder why this person has emerged in Canada – but our lawyers are getting ready.”

He did not give details of how or where the plane was seized.

“I summoned the Canadian ambassador to Tanzania and clearly told him that Tanzania is not happy – and we are actually angry,” Kabudi said.

There was no immediate response to calls to the Canadian High Commission. In 2017, in a separate case, another Q400 turbo-prop plane was impounded by a Canadian construction firm over a $38 million lawsuit.That plane was later released, reportedly after a financial settlement.

“Canada should also know that it is not the only manufacturer of planes in the world,” Kabudi added. This seizure related to a case dating back to the 1980s, when Tanzania’s government nationalised a massive, privately-owned bean and seed farm, seizing everything including equipment, 250 cars and 12 small planes.

The owner, who is now 86, was awarded $33 million (almost 30 million euros) in compensation in the 1990s — but the government only paid $20 million. The outstanding balance of $16 million has accrued interest over the decades and now stands at $33 million, according to his lawyer.

The farmer has been fighting for decades to get the outstanding amount.