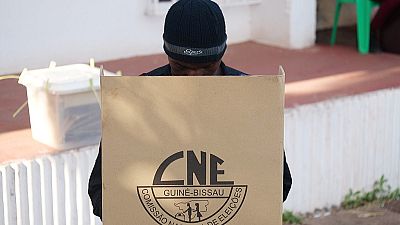 Over 700,000 citizens of Guinea Bissau are eligible to vote in Sunday’s presidential election that pits incumbent president Jose Mario Vaz against old rival and former Prime Minister Domingos Simoes Pereira, and 10 other candidates.

The election comes in the wake of weeks of political turmoil including violent protests, an alleged coup attempt and the emergence of two competing prime ministers.

In this article, we explore the key issues driving the election that many hope hope will usher in a semblance of calm.

Pereira, who has styled himself as a moderniser, is seen as the front-runner by political observers in Guinea Bissau and internationally. He is running as the candidate of the governing African Party of the Independence of Guinea and Cape Verde (PAIGC) that won a parliamentary majority in March’s legislative elections.

Vaz won the 2014 presidential election as the PAIGC’s candidate but fell out with the party after sacking his prime minister in 2015. He is now running for re-election as an independent candidate.

Apart from Vaz and Pereira, main contenders in the race include former prime ministers Umaro Sissoco Embalo and Carlos Gomes Junior, and Nuno Nabiam who is supported by the country’s large Balanta ethnic group.

Embalo and Nabiam have used the campaign trail to accuse ECOWAS of overreach and threatening Guinea-Bissau’s sovereignty.

Vaz’ first term of five years were characterised by high-level sackings and a barely functioning parliament.

“As soon as a new president is elected, Bissau will turn one of the gloomier pages of its history,” said homemaker Virginia Mendes on her way to the shops in the capital Bissau this week.

A pre-election crisis arose from a long-running power struggle between Vaz and the ruling party that has led to a carousel of seven prime ministers since he took over in 2014.

In the latest round of prime-ministerial musical chairs, Vaz fired premier Aristides Gomes on Oct. 29 and appointed a successor to him, but Gomes refused to step down. For around 10 days the country had two prime ministers until Vaz backed down under pressure from the international community, which said his moves were illegal.

Regional bloc ECOWAS had warned of the threat of civil war and urged the authorities not to allow the election to be derailed.

ECOWAS has played a prominent role in trying to resolve the crisis, imposing economic sanctions on people it judged to be undermining efforts to end the impasse in 2018, including members of Vaz’s faction and his son.

“There is a hope that this election, which comes after the legislative election earlier this year, will bring some stability … with a more solid ruling coalition,” Foucher said.

In the past the army has been quick to intervene in politics. Most recently, the 2012 leadership race was abandoned after soldiers stormed the presidential palace.

But the military has not picked sides in the current crisis and has said it will support the police in safeguarding Sunday’s vote.

A second round is scheduled to be held on 29 December if no candidate receives more than 50% of the vote.

Whatever the result, the vote represents a milestone of sorts for Guinea Bissau, which has suffered nine coups or attempted coups since independence from Portugal in 1974. The West African country’s scattered Atlantic islands, mangrove mazes and unpoliced waters have made it a paradise for adventurous tourists and cocaine traffickers en route from South America to Europe.

Vaz will be the first democratically elected president to have completed a full term in the country of 1.6 million.

“It used to be coups and assassinations and now it’s the busy politics of coalition and all sorts of political manoeuvring,” said Vincent Foucher of the French National Centre for Scientific Research.

The next president will inherit difficulties caused in part by the political system, in which the majority party or coalition appoints the government but the president has the power to dismiss it in certain circumstances.

The African Development Bank says the protracted instability has muddied the outlook for the economy, which despite annual growth of around 5% is already hostage to the volatile price of cashew nuts that are the main income source for over two-thirds of households.

Drugs and corruption remain a problem, however. There have been high-profile busts this year, including the discovery in September of a record 1.8 tonnes of cocaine hidden in flour bags.