Africans seeking asylum at a United Nations office in South Africa have been forcibly removed by police stating that their action amounted to tresspassing.

On Wednesday, a court order was granted instructing the 300 refugees camping there since 7 October, to vacate the area within three days, local media outlets reported.

Hundreds of asylum seekers had been camping for weeks now in makeshift structures in front of the offices of the United Nations High Commissioner for Refugees (UNHCR) in the capital Pretoria.

Many came into SA fleeing life threatening situations of war, epidemics and violence from the DRC and other neighbouring southern countries and say the South African authorities have been delaying the regularization process for their status.

Most of them say they no longer feel safe after the last wave of xenophobic violence that killed at least 12 people in September.

In Cape Town (south-west), they organized the same operation, but were expelled manu militari at the end of October. In Pretoria, justice ordered them Wednesday to evacuate the place under 72 hours. 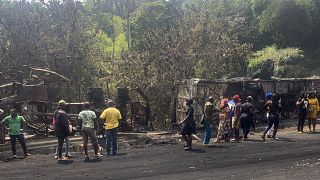