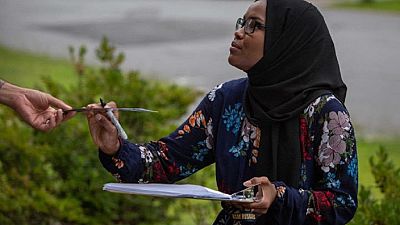 The second-largest city in Maine, home to thousands of African newcomers, has elected a Somali American to its city council.

Safiya Khalid, 23, soundly defeated a fellow Democrat on Tuesday for a seat on the Lewiston City Council in a campaign that was marred in the final days by nasty attacks and threats fueled by social media.

Shrugging off the attacks, Khalid declared that her victory is proof that “community organizers beat internet trolls.”

A photo of Khalid flipping off the camera when she was a high school freshman and references to her opponent being taunted were featured in the online attacks, most of which originated outside of Maine.

The hateful messages that poured in from across the country attacked her religion and her skin color, she said. Someone said she should be stoned. Another person shared her home address on a Facebook group.

“My reaction was how can people be so mean and full of hate? I was left speechless. It was all about intimidation,” she said.

She deleted the Facebook app from her phone and deactivated her Twitter account. Then she focused on continuing to knock on doors whenever she wasn’t at her job as a caseworker for a nonprofit agency.

Maine is the nation’s whitest state, but it is home to a growing population of Africans who’ve fled their homeland.

“It was a historic night for us,” she said. “We’re delighted.”

Somalis began moving to Lewiston two decades ago in search of affordable housing after many settled in Portland. The city of 36,000, second in population in Maine only to Portland, is now home to more than 5,000 Africans.

For her part, Khalid was born in Somalia and remembers living in a refugee camp before coming to the United States.

She said she’s excited about bringing greater diversity to city government. As a council member, she wants to ensure that there’s affordable housing that’s free from lead contamination, which is a problem in the city’s older housing stock. She wants to boost aging infrastructure, bring in investment, and support local businesses.

She also wants to boost schools. “When I came here, I didn’t know how to write my name or speak any word of English. I am who I am because of public education. Our children deserve the highest-quality education,” she said.