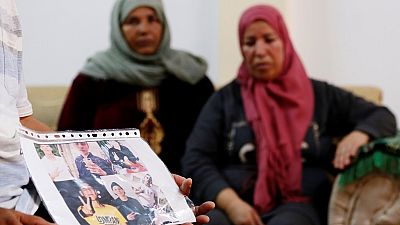 It only took 10 minutes for Fakher Hmidi to slip out of his house, past the cafes where unemployed men spend their days, and reach the creek through the mud flats where a small boat would ferry him to the migrant ship heading from Tunisia to Italy.

He left late at night, and the first his parents knew of it was the panicked, crying phone call from an Italian mobile number: “Pray for me and forgive me. The boat is sinking and we are dying.”

Hmidi, 18, was one of several people from his Thina district of the eastern city of Sfax among the dozens still unaccounted for in this month’s capsizing off the Italian island of Lampedusa, as ever more Tunisians join the migrant trail to Europe.

Pray for me and forgive me. The boat is sinking and we are dying

His loss, and the continued desire among many young men in Thina to make the same dangerous journey, vividly demonstrate the economic frustration that also drove voters to reject Tunisia’s political elite in recent elections.

In a parliamentary vote on October 6, the day before Hmidi’s boat sank just short of the Italian coast, no party won even a quarter of seats and many independents were elected instead.

In the Hmidis’ modest home, whose purchase was subsidised by the government and on which the family is struggling to meet the repayment schedule, his parents sit torn with grief.

Mokhtar lost his job as a driver two years ago and has not been able to find work since.

Much of the little they had went to Fakher, the family said, because they knew he was tempted by the idea of going to Europe. At night the family would sit on their roof and see the smuggler boats setting off.

A survey by the Arab Barometer, a research network, said a third of all Tunisians, and more than half of young people, were considering emigrating, up by 50 percent since the 2011 revolution.

The aid agency Mercy Corps said last year that a new surge of migration from Tunisia began in 2017, a time when the economy was dipping.

Unemployment is higher among young people than anyone else in Tunisia. In the first round of the presidential election on September 15, and in the parliamentary election, in which voter turnout was low, they also abstained by the highest margin.

When an apparently anti-establishment candidate, Kais Saied, went through to the second round of the presidential election on Sunday, young people backed him overwhelmingly.

But their support for a candidate touting a clear break from normal post-revolutionary politics only underscored their frustration at the direction Tunisia took under past leaders.

On the bare patch of mud by the creek where Fakher Hmidi took the boat, some boys were playing. For them, the migration to Europe is – as it was for Hmidi – a constant background possibility in a country that offers them few other paths.

At the time of Tunisia’s 2011 revolution, they had great hope, Mohkhtar Hmidi said. But economically, things got worse. Fakher found little hope in politics, he said.

An improvement would come too late for the Hmidi family, still waiting nearly two weeks later for confirmation that their only son has drowned.