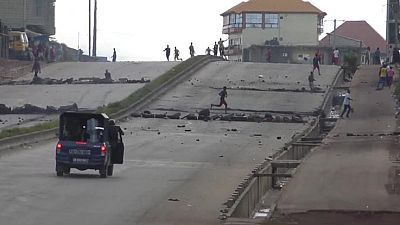 Guinea’s public prosecutor on Friday requested before a court in Conakry the maximum penalty of five years in prison for the main protest leaders against a possible third term bid of President Alpha Condé.

The court will issue its judgment next Tuesday.

In a court under high police protection and full of people, Prosecutor Sidy Souleymane Ndiaye requested the same five-year prison sentence against seven of the eight defendants, with a fine of two million Guinean francs each (194 euros).

He requested the release of the eighth defendant.

The defendants are leaders of the National Front for the Defence of the Constitution, a coalition of political parties and civil society groups behind demonstrations in Conakry and several cities in Guinea.

The prosecutor likened their action as an “insurrection”. He spoke of “insidious, serious and dangerous statements to disturb public order”.

The authorities claim these protests are illegal stressing police did not approve of them. From the beginning, he justified the repression of the protests on grounds of public safety. The prosecutor also noted that the FNDC had called for the paralysis of mines, banks and all economic activity.

The defendants’ lawyers contested that their clients had called for the demonstrations and requested for their release.

“The Guinean Constitution is not a rag,” said one of the lawyers, Halimatou Camara, calling supporters of a third term of office “arsonists”, in a warning against the risk of escalation if Alpha Condé confirmed his plans.

The protest has already resulted in ten deaths among the demonstrators and 70 gunshot wounds, and nearly 200 arrests, according to the FNDC. The authorities claim nine people have lost their lives.

The FNDC intends to block President Condé‘s plan to have the Constitution revised to run for a third term in office when his second term expires in October 2020. Guinea’s current Constitution limits a president to two term limits.

The NGO Human Rights Watch has called for an end to the repression, the release of those arrested and an investigation into the violence. The authorities have banned all demonstrations since July 2018, but repression has intensified in recent days.

It recalls that in the past it has extensively denounced the “excessive use of lethal force” by Guinean police and gendarmes during demonstrations and acts of brutality against demonstrators. It denounces the “almost total impunity” of the security forces. “The systematic ban on all demonstrations, the arbitrary arrest of civil society leaders and the use of violence to disperse demonstrators show that the government is prepared to trample on human rights to repress the protest,” the statement noted.

The international community is alarmed by the current tensions in a poor country despite its significant mineral resources, with uncertain stability and a tradition of extremely violent protests and repression.