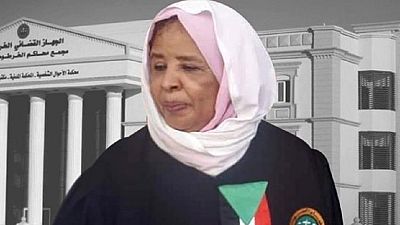 Sudan’s Nemat Abdullah Khair on Thursday became one of a small number of female judiciary heads on the African content, following her appointment to the position by the ruling Transitional Sovereignty Council.

This is the first time the Arab Muslim nation will have a female leading the judiciary, which has in the past been accused of enabling former president omar al-Bashir’s regime to suppress dissent and lock up opposition figures.

The Supreme Court Judge was nominated by the judges’ professional association, which was part of a protest movement that helped oust Bashir in April.

Nobody would want to intimidate me simply because I’m a woman.

The two judicial officials “will carry out their tasks in addressing corruption cases and other cases”, the sovereignty council member spokesman said in a statement without giving details.

The other female chief justices on the African continent include;

Hon. Dr. Mathilda Twomey is the 7th Chief Justice of the Supreme Court of Seychelles. In 2011, she became the first female judge in the history of the Indian Ocean island-nation, and in 2015 made history as the country’s first female chief justice. Twomey was last year exonerated by an impeachment inquiry that was investigating allegations of abuse against her.

Appointed chief justice of Lesotho in 2014, Nthomeng Justina Majara is the first woman to hold this office.

‘‘I got messages of encouragement from all spectrums of society. I felt honoured and humbled by such a huge vote of confidence in me,’‘Majara told local media when asked about reactions to her appointment.

‘‘I’m notorious for being a very firm person. Nobody would want to intimidate me simply because I’m a woman.’‘

Majara was last year suspended from office, pending an impeachment inquiry against her. She has been temporarily replaced by another woman, Maseforo Mahase as the acting Chief Justice.