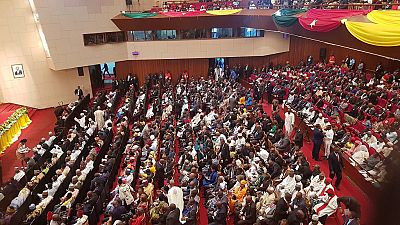 Cameroon’s president Paul Biya on Friday praised this week’s national dialogue, saying a series of recommendations had been published, including the equality of English and French speakers, giving greater autonomy to the provinces and offering amnesty to fighters who down arms.

The dialogue “afforded you the opportunity to reaffirm once more your attachment to peace and concord in your country,” Biya said in a tweet addressing the people. “I would like to congratulate and thank you very sincerely for that.”

The government hoped that the talks, which closed on Friday, would open the door to a historic peace agreement, ending a fight between the army and English-speaking militias seeking to form a breakaway state called Ambazonia.

This special status is just a first step towards finding a permanent solution to this crisis.

The conflict has cost nearly 2,000 lives, forced half a million people to flee and presented President Paul Biya with his biggest threat in nearly 40 years of rule.

What did the government offer?

Biya, who is 86 years old, said on Tuesday that he would drop charges against 333 prisoners held in relation to the crisis, but the move failed to appease separatists and moderates alike who say that thousands more remain imprisoned on trumped-up charges.

On Thursday, delegates at the Grand Dialogue recommended the adoption of a “special status” for the two regions where most of the country’s English-speaking minority (16%) live.

The special status, if approved by the central government, would grant them greater financial autonomy, the possibility of electing their local governors previously appointed by the executive, and the restoration of a house of traditional chiefs in these two regions.

The prime minister, Joseph Dion Ngut, who chaired the dialogue, described it as “a success (…) because it found interesting and permanent solutions to the problems most Cameroonians” were raising.

Several moderate Anglophones, in favour of a return to federalism and not in favour of the secession demanded by the radical ones, cautiously effectively welcomed the recommendation.

“This special status is just a first step towards finding a permanent solution to this crisis”, the famous Anglophone human rights lawyer Felix Agbor Nkongho told the AFP.

Its application, which requires a constitutional amendment, “could have a strong symbolic value in the minds and attitudes of those who wanted a return to federalism,” says Cameroonian researcher Edouard Epiphane Yogo of the Bureau des Etudes Stratégiques in Yaoundé.

Critics say it is ‘not enough’

However, “the war is not over,” says English-speaking activist Ayah Ayah Ayah Abine, who believes that “only negotiation between the two sides can put an end to the war.

“After the thousands of lives wasted by the radicalization of both sides, something really special would be needed to end this conflict,” he added, arguing that Yaoundé‘s proposed status for the English-speaking regions is “only a combination of words that does not cover anything specific.

The dialogue was boycotted by key leaders of the separatist movement.

“The inhabitants of Ambazonia do not need a special status. We are not part of Cameroon,” Ebenezer Akwanga, leader of one of the separatist armed groups told AFP.

“Ambazonia is marching towards freedom and nothing can stop us,” he added.

For Chris Anu, the independence leader, this proposed special status is almost an insult:

“Do they suggest that we are a handicap?”, he asks, before asserting: “Nothing less than total independence for the people of the Southern Cameroons (another name for the English-speaking state wanted by the independentists), and there is no way to discuss it”.

Critics say the talks this week were not inclusive and did not involve any discussion about a return to federalism that many say is the solution to the conflict.

“Cameroon is a joke,” said Cho Ayaba, a leading member of the Ambazonian Governing Council. “Let me be absolutely clear: no Ambazonian is and will be part of Cameroon’s charade.”

Former opposition presidential candidate Akere Muna was told at the talks that the people allowed to speak at one session had already been identified and that he would not be able to participate.

“I said to myself, but that’s not a dialogue,” Muna told Reuters. “It’s a show and I’m a spectator. I left.”

Roots of the conflict

The roots of their grievances go back a century to the League of Nations’ decision to split the former German colony of Kamerun between the allied French and British victors at the end of World War One.

For 10 years after the French- and English-speaking regions joined together in 1961, the country was a federation in which the Anglophone regions largely governed themselves. Biya’s centralisation push after he came to power in 1982 quickly eroded any remaining Anglophone autonomy.

The insurgency emerged after a heavy-handed government crackdown on peaceful protests late in 2016 in the Anglophone Northwest and Southwest regions by lawyers and teachers who complained of being marginalised by the French-speaking majority.

Within months of the initial 2016 protests, newly-formed armed groups were attacking army posts in the Anglophone regions. The army responded by burning down villages and shooting civilians.

Once vibrant cities, including the technology hub of Buea, have turned into ghost towns. Most schools have closed; villages have emptied out as people flee into Nigeria.

Separatists entrenched in the mountainous west say they will only come to the table if the government releases all political prisoners, including 10 leaders who were sentenced in August to life in prison on terrorism charges, and withdraws the military from the two English-speaking regions.

“When we want to bring peace, it is generally the symbols that count, the symbol is not the number” of detainees released “but rather the quality” of those who are released,” warns Yogo.