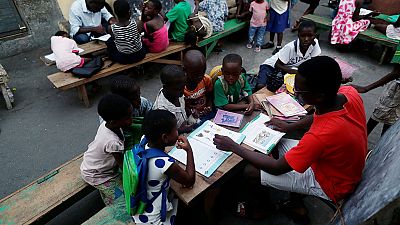 Ghanaians are still debating a proposed school sex education program after religious groups said it was part of a “satanic” attempt to promote LGBT+ values.

The backlash forced government and U.N. officials to defend the Comprehensive Sexuality Education (CSE) program, which was devised by the United Nations and Ghana’s government, saying it had no explicit LGBT+ content.

Too young for sex education

The National Coalition for Proper Human Sexual Rights and Family Values, said on radio and Facebook that 6 was too young to start learning about sex and criticized a module called “being a male or female”.

I think most people are arguing from an ignorant point of view.

Christian groups in the West African country have said it is part of an “active strategy” to spread LGBT+ acceptance in Africa.

Same-sex relations are banned under a colonial-era law in Ghana, and homophobia is common, although prosecutions are rare, according to Human Rights Watch.

Ghana’s education minister gave a press conference on Tuesday urging critics to check the facts and assuring them that the curriculum – which has not yet been implemented – would not compromise national values.

U.N. officials went on television to try to calm the uproar.

“They think it’s all based on foreign influence. That’s the issue,” said Niyi Ojuolape, country representative for the U.N. Population Fund in Ghana, emphasizing that the curriculum was designed by Ghanaians with the local context in mind.

“The curriculum does not include LGBT issues explicitly, but of course LGBT issues are human rights, so we talk about the rights of the individual to determine what they want to do,” he told the Thomson Reuters Foundation.

CSE teaches sexual and reproductive health with an emphasis on “values such as respect, inclusion, non-discrimination, (and) equality,” according to the U.N. Educational, Scientific and Cultural Organization (UNESCO).

Representatives of LGBT+ rights groups in Ghana said they were saddened by the backlash, but that most of the content of the proposed curriculum was already taught in schools.

“I think most people are arguing from an ignorant point of view,” said Shone Edem, spokesman for Ghana’s Alliance for Equality and Diversity.

The education minister said in a statement that the new curriculum has not yet been approved for use. UNESCO did not immediately respond to a request for comment.

Ojuolape said it would take time for the program to be approved and teachers trained, but he expected it to move forward after a debate.

“At the end of the day, Ghana cannot be left behind from the rest of the world,” he said.

Ah!
So Ghana, why?
A whole LAWYER!!! Your argument against sex education is DOLI INCAPAX!!!
And it is illegal to teach it because of that…
I mean, Hooooooowww??How does that even make sense!!!
But Noooooo…It’s us Aunty Sophia is here worried about
Tsew

Ignorance is bliss. Sex education and people are already thinking about having sex. Lmao ?
Ghana we just pretend no one here has sex.
But just be truthful to yourself. If you had a proper sex education as a teenager, would your life have ended up this way? #JoySMS

Ghana we already learn a lot of useless things in school so sex education is not need. They should focus on clearing corruption, starting with the kids and teaching them to be honorable people.
Sex education is the job of the parents.
After all education begins at home