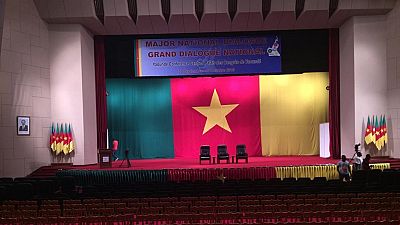 Key leaders of the Anglophone separatist movement in Cameroon boycotted the first day of a national dialogue that government hopes will resolve the decades-old conflict in the Northwest and Southwest regions of the country.

Nearly 3,000 people have died and half a million fled their homes since fighting broke out in 2017 between the army and insurgents who want independence for Cameroon’s two English-speaking provinces.

President Paul Biya, who has been in power for 37 years, announced the dialogue earlier this month hoping to end the crisis that is also hurting the economy of the coffee and cocoa-producing Central African state.

As the five-day talks opened at the Congressional palace in the capital Yaounde on Monday, Prime Minister Joseph Dion Ngute called on all participants to be “true architects of peace”.

Dion Ngute, who is leading the negotiations, added that the “preoccupations” between the opposing sides were “not unsolvable’‘.

Even before it began, the dialogue ran into trouble with many activists arrested and experts voicing scepticism that it would yield tangible results.

Moderate anglophones like Cardinal Christian Tumi, the influential archbishop of Cameroon’s economic capital Douala, have welcomed the initiative and urged separatists to participate.

“I am hopeful that coming out of (the dialogue) something good is starting to happen,” Tumi told AFP.

The cardinal was in the front row for the opening of the dialogue, sitting next to veteran opposition leader John Fru Ndi, who does not have the support of the separatists — he has been kidnapped twice in the anglophone areas this year.

“I am happy that some young people left the forest and came to talk,” perennial presidential hopeful Fru Ndi told AFP.

Before the prime minister’s speech, 20 young anglophone former fighters, dressed in the colours of Cameroon’s flag, went on stage to highlight the “marginalisation” of English-speakers on their own land.

The separatist leader presented by the government as most open to dialogue, Mark Bareta, pulled out of the talks on Friday saying that “the only way to have real negotiations is to hold them on neutral territory.”

Of the 16 separatist leaders invited, those heading armed groups such as Ebenezer Akwanga and Cho Ayaba are also snubbing the talks.

Akwanga told AFP that the event was a “smokescreen for the international community rather than an attempt to secure a complete and lasting solution… to the annexation of our country”.

Cho Ayaba, a leading member of the Ambazonian Governing Council, one of the main separatist organisations, said the separatists did not recognise the government’s authority to convene a dialogue.

“No Ambazonian will take part in Biya’s charade,” he said.

Most of the leaders have expressed willingness to hold talks with the government but in the presence of an international mediator and in a foreign country with the terms for secession the main item on the agenda, according to the International Crisis Group.

Cameroon’s main opposition party is also refusing to attend this week’s talks until the government meets its demands, including the release of its leader Maurice Kamto.

Kamto was arrested in January for leading protests against an election last year that he denounced as fraudulent. Biya, 86, won re-election in that vote, extending his nearly four decades in power.

The ICG has estimated that around 3,000 people have been killed by separatist violence and the military crackdown.

The ICG said that as the talks do not include separatists or anglophone leaders, it “risks further frustrating anglophones widening the gulf between the two sides and empowering hardliners”.

“The government should make greater space for anglophones, particularly federalists who are willing to attend. It should also seek a neutral facilitator.”

Biya’s government has rejected both a return to more federalism and any proposed separation.

October 1 marks the second anniversary of the spiral towards conflict, the declaration of the self-described “Republic of Ambazonia” for Cameroon’s English-speaking minority.

English-speakers account for about a fifth of Cameroon’s population of 24 million, who are majority French-speaking.

Anglophones are mainly concentrated in two western areas, the Northwest Region and the Southwest Region, that were incorporated into the French-speaking state after the colonial era in Africa wound down six decades ago. Many locals in the two regions complain of discrimination and marginalisation.

What do Cameroonians think?

Outside the Congressional palace on Monday, locals were divided about the talks.

“I don’t know how much importance can be given to what people say in this dialogue when people are being shot at” in anglophone areas, said Yaounde resident Joseph.

“We want peace to return. Everyone just needs the opportunity to express themselves.”