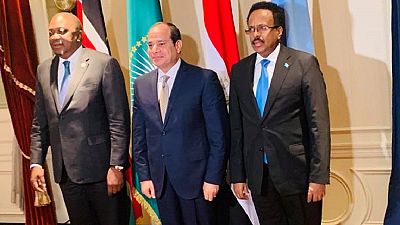 Somalia and Kenya have agreed to normalise ties, following months of tension over a maritime border dispute.

In talks mediated by Egypt’s president Abdel Fattah el-Sisi, the Kenyan and Somali heads of state agreed ‘to restore relations to previous status’ and ‘take diplomatic steps to build confidence between the two governments’.

Kenya and Somalia have been at loggerheads over a maritime and territorial dispute, that is currently before the International Court of Justice, ICJ, in The Hague.

Since February this year, when Somalia accused Kenya of auctioning oil and gas fields in the disputed maritime area, relations between the two countries have gone cold.

Diplomats of the two countries have been working overtime to manage incidents including suspension of direct flights from Mogadishu to Kenya, and Kenya’s cheeky recognition of Somaliland as a country.

The agreement reached in the United States on the sidelines of the United Nations General Assembly, is the second time this year, that both countries are committing to restoring diplomatic relations.

In this new agreement, Somalia reportedly insisted that the maritime case should be left to the ICJ for final arbitration.