In a statement posted on Twitter, Ghana’s government said the plot that was targeting the presidency, had “the ultimate aim of destabilising the country”.

The statement added that government had monitored activities of the plotters for 15 months, culminating in the arrest of three plotters and seizure of weapons last Friday.

What was being plotted

According to the Ghanaian government, a group known as Take Action Ghana (TAG), was working to recruit and radicalise a base of young people against the political authorities, under the guise of “nation-building”.

The government claims the group was plotting with serving military officials procure weapons, take over key installations and secure funding, with an aim of taking over government.

During the seizure, overnment says it was able to recover a stash of weapons including, six pistols, three smoke grenades, 22 IEDs, two AK47 magazinesn computer equipment and one long knife.

News of the coup plot has been met with mixed reactions as some Ghanaians doubted the capacity of the arrested individuals could pull off such a mission, and others condemned any non-democratic means of changing government.

Ghana’s president Nana Afuko-Addo was elected in 2016, and will be seeking a second term next year.

So who were those plotting the coup?

If genuinely there was an attempted coup plot we will support them in Ghana if they had succeeded?

What were they even thinking?

If this was their weapons cache, I'm not too sure how credible the claims of a coup to overthrew the presidency are: Military personnel have been picked up in connection with a recent bust of a coup plot #Ghana https://t.co/b77pGEX6TJ 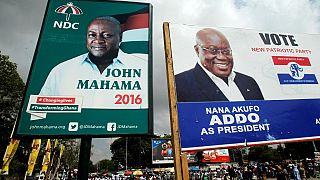