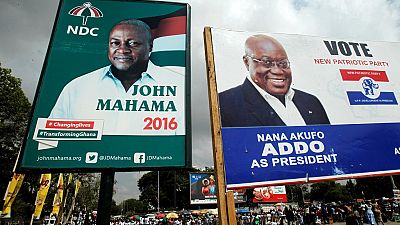 Ghana’s president Nana Akufo-Addo and main opposition leader John Mahama will face off for a third consecutive time at the presidential election in 2020, after the latter’s party confirmed his nomination on Wednesday.

Mahama, who succeeded his deceased predecessor in 2012, defeated Akufo-Addo in the presidential election later that year.

In 2016, the two faced off agaian, and this time round, Akufo-Addo unseated Mahama, capitalizing on an economy that was slowing due to falling prices for gold, oil and cocoa exports.

The National Democratic Congress’s (NDC) ticket designated Mahama its candidate for the December 2020 vote at a party congress over the weekend, its director of elections, Elvis Ankrah, told Reuters.

Akufo-Addo, who is expected to stand for re-election as the candidate of the New Patriotic Party (NPP), campaigned in 2016 on promises to cut deficits following overspending by Mahama’s government that blew a $1.6 billion hole in the budget.

He has presided over an economic recovery, with growth of 6.7 percent in the first three quarters of last year.

Ghana is the world’s second-largest cocoa producer, Africa’s number two gold producer and it began pumping oil off its coast in 2010.