Nigerians shocked by conspiracy and money laundering charges against activist 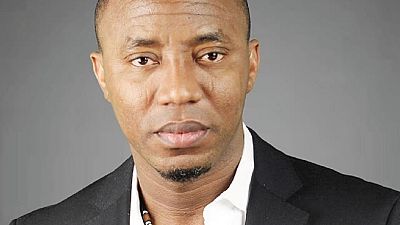 Nigerians take to social media to express their shock over the charges brought against a detained activist. Pro-democracy activist Omoyole Sowore detained since august has been charged with seven counts of money laundering and conspiracy.

According to Vanguard The activist behind RevolutionNow Protest movement was charged by the Federal High Court on Friday. Among other things, the court said the activist’s #RevolutionNow” campaign was aimed at removing the President and Commander–in-Chief of the Armed Forces of the Federal Republic of Nigeria during his term of office otherwise known than by constitutional means”.

The detained activist is also the publisher of Sahara Reporters, was the presidential candidate of the African Action Congress, AAC, in the last general election, has been in custody of the Departemenmt of State Service, DSS, since August 2 when he was arrested.

The charges were filed a day before the expiration of the detention order of the Federal High Court in Abuja permitting the Department of State Service to keep the activist for 45 days, said The Point

Sowore knew the lengths to which this government will go to destroy a person's reputation. He used his SR platform to help them do just that. He knew the dangers of dissent beforehand, but chose the way of selective amnesia. When you eat with the devil, use a very long spoon.

This dangerous precedent of stifling opposition voices and dissenting opinions has survived enough. Let's not pretend our nascent democracy isn't being sabotaged when citizens shudder at the thought of people they elected into power. I plead for Sowore #FreeSowore #VoiceOfTheDon pic.twitter.com/y9RZ2MrpEu

It's 50 days today since Dadiyata went missing. Sowore has now spent 49 days in DSS detention. Stephen Kefas has clocked 123 days in a Kaduna prison over a Facebook post. Agba Jalingo is being charged for treason as Jones Abiri remains locked up. We cannot continue like this… pic.twitter.com/9g418vdGHx

IN CASE YOU MISSED IT: DSS Charges YeleSowore, Mandate For Treasonable Felony, Cyberstalking MBuhari | Sahara Reporters
Sowore was arrested on August 3, 2019 in Lagos for planning a series of protests against bad governance in Nigeria tagged.
READ MORE: https://t.co/ytwnHFWTz3 pic.twitter.com/F9v6jMS4Hj