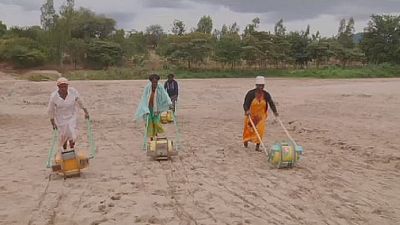 This water roller invention has come in handy for Kenyan women. Hitherto, they had to carry water on their heads or backs for their daily chores.

This is thanks to 70-year old African-American inventor and businessman, Herman Bigham.

‘‘Rolling Springs’ is the name of the invention, system that we put together to be able to relieve women and children and the elderly from carrying water on their backs. I became very clear about the level of strain and physical handicap and injuries caused by doing this. And also, Kenya and Africa is so advanced now in so many ways and at the same time we still have women and children carrying water on their backs for 10, 20 kilometres”, said Herman Bigham, inventor of “Tosheka Rolling Springs” water roller:.

'Tosheka Rolling Springs' enables me to transport 15 jerry cans with ease whilst carrying my child on my back.

Esther Muindi is a 26-year-old mother of two. She said the ‘Tosheka Rolling Springs’ has brought her badly needed relief.

“Carrying water on my back is usually a heavy burden especially when I am pregnant. I sometimes need a lot of water, approximately 10 jerry cans; yet the water source is 2 kilometres away. ‘Tosheka Rolling Springs’ enables me to transport 15 jerry cans with ease whilst carrying my child on my back”, Muindi said.

The water roller are made in Kenya. The rollers are made from a combination of recycled materials like old tyres and local wood.

“It has a lot of advantages even though it is low tech. It’s advantages are, the water container never comes in touch with the ground, therefore it’s preserved, it doesn’t become contaminated and it’s also extremely easy to transport, makes it easy to transport the water, whereas some of the systems, they carry more water, have a lot of problems with the containers being busted by the very rough terrain over which one has to travel”, Bigham added.

The roller currently retails for $60 and this is far beyond what many women here can afford.

But the inventor says he plans to make it cheaper through the manufacturing process of moulding.