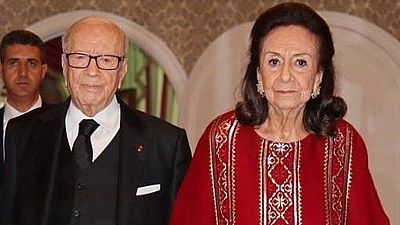 The wife of Tunisia’s late president, Beji Caid Essebsi died on Sunday, as Tunisians were voting to elect his successor less than two months after his death.

Chadlia Farhat, Essebsi’s widow, died at the age of 83, their son said without details.

My mother Chadlia, widow of Béji Caïd Essebsi, is dead, God bless her.

It would be recalled that Mrs Essebsi, 83, in July welcomed many heads of state who had come to pay their respects to her husband who died at the age of 92, after having been the first democratically elected president by universal suffrage in Tunisia.

Elegant and discreet, she rarely appeared in public, unlike the first ladies of post-independence Tunisia, Wassila Bourguiba and Leïla Ben Ali.

“We tell each other everything, and he always asks me for my opinion,” she said in a rare interview with Leaders magazine in November 2014, during her husband’s campaign.

“This time, I felt that he was so eager to save Tunisia, and I couldn’t stop him. You have to make sacrifices when it comes to the country you live in. Since then, I have realized the extent of the necessary security measures, but we are trying to keep the same pace of life,” she added.

The couple had two daughters and two sons, including Hafedh Caïd Essebsi, who retained control of the party created by his father, Nidaa Tounes, at the cost of struggles by people who decimated the formation.