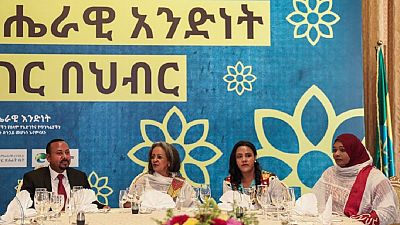 Ethiopians today (September 12) usher in New Year with bright and colourful decorations in the capital, Addis Ababa and other cities and towns across the Horn of Africa country.

Nationals enter the year 2012 according to the Ethiopian Orthodox calendar, which is nearly seven years behind the Gregorian calendar commonly used worldwide.

Locally known as Enkutatash, Amharic for gift of jewels, family and friends come together to spend time with one another. Social media is also buzzing with the people sending congratulatory messages.

The 2018 edition was a special one given that it coincided with the signing of a peace deal between Ethiopia and Eritrea. Leaders of the two countries reopened borders on the occasion.

For this year, Prime Minister Abiy Ahmed and President Sahle-Work Zewde were in attendance for a Wednesday evening event commemorating the day. Also present at the event at the National palace was president of the Somali Regional State, Mustafa Omer.

Happening now: New Year Eve celebration and the culmination of the 6 days of MEDEMER,
at the National Palace.

Happy #Ethiopia’s New Year to all!

Family is more than blood! “If you want to lift yourself up, lift up someone else.”

Challenge yourself to do something special in the New Year! Love can help you achieve this! Make a difference. Wishing you lots of luck! pic.twitter.com/5WZZKFF7TR

I wish the entire people of Ethiopia a HAPPY NEW YEAR OF 2012 ??
May PEACE reign throughout the country, the horn, the whole region and beyond.?

Why Ethiopia is “behind” the rest of the world?

The country – the only one in Africa to fend off colonialism, follows a calendar similar to the ancient Julian calendar. Ethiopia operates with the Coptic Calender, reason for being behind the world in years.

This is despite most parts of the world having adopted the Gregorian calendar, which is made up of 365 days in a year and 366 days in a leap year.

“The difference in year numbering is believed to be because the Ethiopian Orthodox Church disagrees with the Roman Catholic Church about when Christ was born.

Thus, in contrast to the Gregorian calendar, which is factored in the calculation of the year in which Jesus was born, the Ethiopian Church adopted a calendar tied to the calculation of the Annunciation (Jesus’s conception, not birth) arrived at by Egyptian monk-historian Annianus of Alexandria,” a Face2Face Africa report noted.

It continued with the Mathematics of the calender years: “A year in the Ethiopian calendar is 13 months long, with 12 months of 30 days each. The last month has 5 days in a common year and 6 days during a leap year.