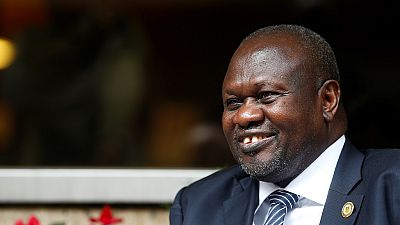 The two men signed a pact a year ago to end a civil war that has killed hundreds of thousands of people, displaced a third of the population and wrecked the economy.

But the roll-out of the accord, which called for a unity government, has been delayed because the government says it does not have enough money to fund disarmament and the integration of all the armed factions.

“The meeting aims at discussing the outstanding issues related to the implementation of the R-ARCSS (peace deal) with President Kiir and other head of the parties to the agreement,” Machar’s director for information, Puok Both Baluang, said.

“He is expected to come and sit down with President Salva Kiir to discuss all the issues of the peace agreement and what to do in the future,” government spokesman Michael Makuei told AFP.

Kiir has not been seen with Machar since a meeting at the Vatican last April, during which Pope Francis kissed the feet of the two men accused of war crimes.

South Sudan split away from Sudan in 2011 after decades of war but plunged into its own conflict at the end of 2013 after Kiir sacked Machar as vice president.

Troops loyal to both men clashed in the capital that December and ethnically charged fighting soon spread across the state, shutting down oil fields, forcing millions to flee and killing hundreds of thousands of people.

Both sides signed a peace deal in September 2018, under pressure from international and regional powers. Machar who lives in Khartoum, has since returned to Juba just once, in October that year, to celebrate the peace deal.

A key provision of the peace deal is integration of former rebels in the army, which has still not occurred.

The cost of these measures could reach $285 million, but only $10 million has been provisioned so far.