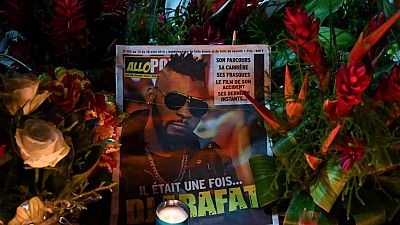 Follow LIVE coverage of the event by national TV, RTI

Funeral rites are underway in Ivory Coast for famed music icon, DJ Arafat, who died earlier this month. The 33-year-old was killed in a motorcycle accident in the capital Abdijan.

Reports indicate that over 200,000 supporters of the coupé-decalé originator are expected in and around the venue of the funeral, the Felix Houphouet Boigny stadium in Abidjan.

The tribute concert taking place at the stadium has attracted some heavyweights in African music. Fally Ipupa, Maître Gims, Davido, Sidiki Diabaté, Koffi Olomide are amongst the stars lined up.

The state broadcaster, RTI, is streaming proceedings on its Facebook page.

The event will be attended by President Alassane Ouattara and other political leaders of the West African country. Aside reopening the stadium for the funeral ceremony, the government gave 250,000 USD towards the event.

A group of fans had via an online petition requested that the government avails the 35,000 seater facility for a befitting send off for their hero.

Social media postings show a packed stadium whiles giant screens have been set up outside for fans who fail to make it inside. The ceremony will also be broadcast on radio and TV.

Ivorians and music lovers across Francophone Africa hail Arafat for the “coupé décalé” genre, described as a distinctly Ivorian style of dance music. Arafat is credited with selling it to Africa and the world.