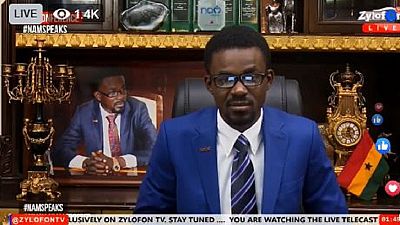 Nana Appiah Mensah, known by his alias NAM1 was recently released by a court in the capital Accra after his bail conditions were met. He was detained by authorities upon his return from Dubai jail in July.

NAM1 addressed a wide range of issues that had occured in his absence principally appealing to government to help his outfit to pay customers who have been living in fear of losing their investments.

Harrowing, daunting, terrific and horrific experience, I am grateful to God because I feel very refreshed and fine. It has made me grow older than my age as we grow in our experiences and not in years.

“Harrowing, daunting, terrific and horrific experience, I am grateful to God because I feel very refreshed and fine. It has made me grow older than my age as we grow in our experiences and not in years,” he said of detention in Dubai.

He gave three conditions given which his outfit could settle all financial obligations owed to its thousands of customers. All three had to do with government assistance and directives.

The first being assistance to help Menzgold recover money owed it by Horizon Royal Diamond – a Dubai based firm. Second, to unfreeze the company and its CEO’s accounts and assets.

Finally, to give clear direction as to which government agency has jurisdiction to regulate the activities of gold collectibles trade in Ghana.

Hundreds of Menzgold customers have in the past months protested in different parts of the country demanding his deportation from Dubai and retrieval of their monies.

Some went as far as demand that government foots their losses citing regulatory failures by the Bank of Ghana, BoG and allied bodies like the Securities and Exchange Commission, SEC.

Others have however counter-protested and dared government to use tax monies to settle persons who fell for a Ponzi scheme. He insists, however, that the outfit he leads is far from a ponzi.

Menzgold started off as Menzbank changed to Menzbanc after BoG red flag and finally to Menzgold – posing as a mineral collectibles agency and was said to be promising outrageous returns.

A Ponzi scheme is a fraudulent investment operation that pays returns to investors from their own money or money paid by subsequent investors, rather than from any actual profit earned.