Ethiopia U-15 make history with CECAFA tourney in Eritrea 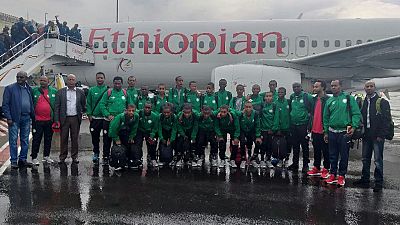 <p>Eritrea is hosting ten other countries for the Council for East and Central African Football Associations, <span class="caps">CECAFA</span>, under 15 championships.</p> <p>The tournament kicked off today, August 16 and is expected to end in early September. Whiles it will be the first major tournament Eritrea will be hosting, there is history being made by the Ethiopian lads in town for the competition.</p> <p>They will be the first Ethiopian team to play in Asmara in over two decades. They get the feat after a friendly match planned for Asmara between the two senior sides failed to hold last year.</p> <p>There are three groups from the draw that was held in Asmara earlier this month.Most of the teams are neighbours of Eritrea along with the East African sides like Kenya, Burundi, Uganda, Rwanda and Tanzania. </p> <p>According to <span class="caps">CECAFA</span> General Secretary, Nicholas Musonye, the aim of the tournament is to develop talents at the grassroot level which is the basic stage in the development of a player. </p> <h2 style="font-size:16px;"> The result of draw is as follows: </h2> <p>Group A – Eritrea, Kenya, Burundi, Somalia</p> <p>Group B – Uganda, Rwanda, Ethiopia, South Sudan</p> <p>Group C – Tanzania, Sudan, Djibouti</p> <blockquote class="twitter-tweet"><p lang="en" dir="ltr">The South Sudan ?? U15 Junior Bright Stars are off to Eritrea ?? for the 2019 <span class="caps">CECAFA</span> U15 Challenge. South Sudan ?? is in group B along side Rwanda ?? Ethiopia ?? and Uganda ??. <br /> <br /> Their opening fix will be on Sat 17th Aug, 2019 against Rwanda ?? Before facing Uganda ?? on Tue 20th <a href="https://t.co/0HyeMkZFvs">pic.twitter.com/0HyeMkZFvs</a></p>— Town Far Fredo. (@townfarfredo) <a href="https://twitter.com/townfarfredo/status/1162008215216906240?ref_src=twsrc%5Etfw">August 15, 2019</a></blockquote> <script async src="https://platform.twitter.com/widgets.js" charset="utf-8"></script>