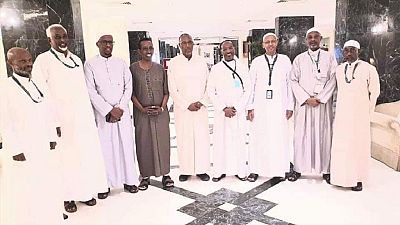 Somalia – Somaliland relations have gained traction on social media with the current buzz centering around a photo.

Top cabinet ministers of Somalia including the Foreign Affairs and Finance Ministers met and took a photo with a Somaliland delegation – led by its president Muse Bihi – in Saudi Arabia’s city of Mina.

The respective delegations were in Saudi in connection with the 2019 edition of the annual Hajj pilgrimage.

For some people, the meeting was a good sign given ever rising tensions between Mogadishu and Hargeisa. Others slammed the Somaliland leaders who have in the past arrested citizens for taking photos with Somalia officials.

Others even posited that the photo was just that, a photo, and that noting will change in the rift between the two. Somaliland is a semi-autonomous part of Somalia.

The latest rift between the two came up when Mogadishu severed diplomatic relations with Guinea for according the Somaliland leader courtesies of a Head of State during an “official” visit.

They met at the hajj. This is very good. Why not meet outside hajj?

I hope this becomes the beginning of a new phase…. https://t.co/Pde9yNuswD

This pic is just that, a pic. Of pilgrims who know each other and after pleasantries pose for a group photo. Nothing more, nothing less. It has no political connotation. It’s vanilla. Plain and simple. Nothing to analyze. Save your analysis for another occasion. #SomaliPilgrims pic.twitter.com/abqaoLKSqS

Lol, it's good lessons for President Bihi to experience this, it is easy to get arrested by meeting someone 4m South, hope he'll have different opinion 4m now on. And from Somaliland position taking pictures together isn't going to change the political indifference already there!