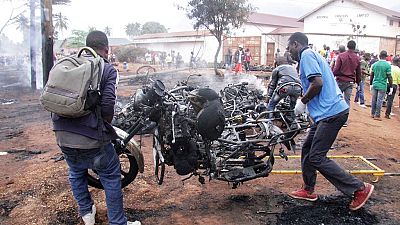 The death toll in a fuel tanker explosion that occured in Tanzania has gone up to 69 from the earlier record of 57, official records have clarified.

Earlier reports noted that 57 in some instances 62 people had died with over 60 others injured after the tanker exploded on Saturday.

“We currently mourn 69 deaths, the last victim died during evacuation while being transferred by helicopter to the National Hospital in Dar es Salaam,” said Prime Minister Kassim Majaliwa.

“The wounded are now 66,” the Prime Minister added whiles speaking to residents in the town of Morogoro, where the incident occured. His interaction was broadcast on Tanzanian television.

In a statement expressing his condolences, President John Magufuli said he was dismayed people attacked vehicles involved in accidents instead of offering help a condemnation of the siphoning of petrol from the vehicle that had crashed.

The president also declared three-days of national mourning for the victims. Those who were immediately identified were to be given a government assisted burial authorities said.

Most of the victims whose charred remains were collected from the scene were siphoning petrol from the vehicle, the state broadcaster TBC Taifa said. The explosion occurred around 200 km (120 miles) west of the capital Dar es Salaam.

“We have been saddened by reports of an accident involving a fuel truck in Morogoro, which caught fire and burnt several people,” government spokesman Hassan Abbasi said on Twitter.

The events took place on Saturday morning in Msamvu Commune, in the immediate outskirts of Morogoro, a town some 200 km west of the economic capital Dar es Salaam, on one of the country’s main highways. .

The truck hit the pavement, trying to avoid a motorcycle, according to witnesses. Riders of “boda-boda” – motorcycle taxis – and other residents of the town flocked to the scene to try to collect fuel ejecting from the tank, it was then that the incident happened.