Ramaphosa asks court to seal some documents in legal battle 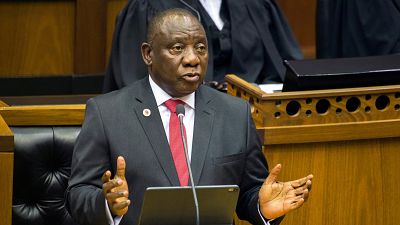 Public Protector Busisiwe Mkhwebane said in July that Ramaphosa had “deliberately misled” parliament about a 500,000 rand ($32,924.20) donation he received for his 2017 campaign to become leader of the governing African National Congress (ANC).

Her report found he had violated an executive ethics code and said there was prima facie evidence of money laundering in his campaign’s handling of donations.

We submit that the bank statements of EFFG2, Linked Environmental Services, Ria Tenda Trust and the Cyril Ramaphosa Foundation accounts contain confidential information which must be protected in terms of the abovementioned provision

Times Live reported that Ramaphosa’s lawyer, Peter Harris, said in a letter to deputy judge president Aubrey Ledwaba on Thursday that Mkhwebane’s report had been based on information obtained illegally and which should not be made public.

“We submit that the bank statements of EFFG2, Linked Environmental Services, Ria Tenda Trust and the Cyril Ramaphosa Foundation accounts contain confidential information which must be protected in terms of the abovementioned provision,” Harris was quoted as saying.

“We have reason to believe that certain of the abovementioned documents may have been unlawfully obtained by the public protector.”

In her report, Mkhwebane said she used copies of subpoenas to FirstRand’s FNB bank, Absa bank and key individuals, as well as copies of affidavits and letters, among key sources of information.

She will submit records of her investigation or all evidence she relied on for the report’s conclusions by Aug. 15, spokesman Oupa Segalwe said in a response via text.

“At this stage she is unable to comment on the letter from the President’s attorneys (which was shared with her attorneys last night) especially since it is addressed to the Deputy Judge President and not to her,” Segalwe said.

“The public protector conducted the investigation by the book. There was no unlawful activity.”

The presidency’s spokeswoman was not immediately available for comment.

Ramaphosa has said he will urgently challenge the report, which he says is flawed. But it is still a headache for the president, who has staked his reputation on cleaning up deep-rooted corruption and reviving Africa’s most developed economy.

Mkhwebane’s office had said she stands by the report and will seek to assist the courts in arriving at the “correct conclusion” by defending it.

The public protector has authority enshrined in the constitution to investigate alleged wrongdoing by public officials and demand remedial action, and her binding rulings can have far-reaching consequences.

Mkhwebane has recently lost three high-profile court cases, however, including one against Ramaphosa, potentially undermining the credibility of her investigations. [nL8N25441E]

Supporters of Ramaphosa say Mkhwebane is acting as a proxy for a rival faction in the ruling African National Congress party aligned with former president Jacob Zuma. She denies that, saying she is simply holding senior officials to account.