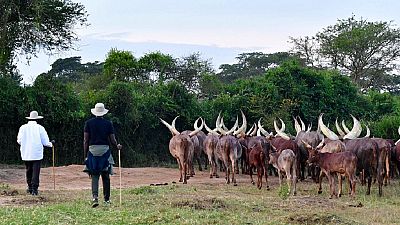 Agriculture in general is a huge driver of economies across Africa. Most nations have a big agrarian backbone.

Ghana and Ivory Coast for example are global heavyweights in the area of cocoa production. Tanzania is a big cashew producer whiles Ethiopia is also famed for its coffee.

Rearing of animals is also a crucial economic mainstay for a number of countries. Most of the sheep that ends up in Saudi Arabia during the hajj season has often been imported from Somalia.

For cattle farmers, it is going to be worse. You will be registered as a farmer, the cow will be registered, numbered and will have a birth certificate because the importers of our products demand meat for cows aged between 15 to 24 months. So we are going to sell [the meat] depending on their age.

African governments have often invested heavily in the area of animal production. But with the cultivation of animals comes a number of headaches, from diseases, security challenges, lack of a ready market at home and deadly conflicts.

They have in the past posted photos of their farms when it is that they get time off their presidential schedules to visit. Museveni is proud of his herd of cattle and touts the importance of agriculture to African economies.

This article is looking at a trend of news on cattle across Africa. We look at Madagascar, Uganda and Nigeria as centers of recent cattle news.

In central Madagascar, authorities recently embarked on a plan to curb cattle theft by tracking the animals with chips. It follows a campaign promise by President Andry Rajoelina, who assumed office this year.

The town of Tsiro-anoman-didy is the first stop of the project. The area known for its zebu cattle. It is a type of cattle with large hump on its back.

The chip was developed by a Malagasy society called Genius Technology Company. 10,000 electronic chips are due to be inserted in cattle over the next three months.

The device works for 7 years, which is the average lifespan for zebu. When the animal dies, the chip is deactivated. The government hopes to insert half a million of these chips to track 2.5 million herds of cattle.

Ugandan cattle to get birth certificates

In mid-July 2019, reports emerged from Uganda that cattle were due to be issued birth certificates to allow their products to be traced.

Mr Vincent Ssempijja, the Minister for Agriculture, Animal Industry and Fisheries, is on record as saying international market demands that all countries producing food for the European market should have proof of its traceability.

Speaking at the official opening of the National Agricultural Show in Jinja, southern Uganda, he said: “Farmers will be registered and their products given barcodes so that if they find a problem with one box, they look for the source and sort out the problem. We cannot enter lucrative markets unless farmers register.”

“For cattle farmers, it is going to be worse. You will be registered as a farmer, the cow will be registered, numbered and will have a birth certificate because the importers of our products demand meat for cows aged between 15 to 24 months. So we are going to sell [the meat] depending on their age,” he added.

Herdsmen have become a topical group of people in Nigeria in the wake of deadly communal clashes that killed thousands of people across predominantly central states.

Clashes between herdsmen and farmers became a topical issue going into the 2019 elections which were won by incumbent Muhammadu Buhari. Experts said the incidents of recent years was a resurgence of historical incidents.