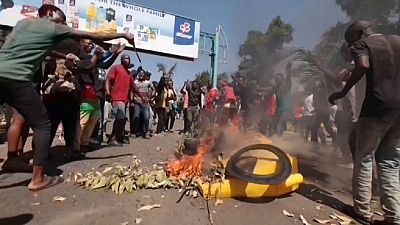 Hundreds of protesters in Malawi’s Blantyre city blocked roads with burning tyres on Tuesday (August 6) as they called for the country’s electoral body to resign following a presidential election they say was rigged.

The protesters marched alongside various politicians, including former Vice President Saulos Chilima, who said the protests will continue until Malawi’s electoral chairperson, Jane Asnah, and her commissioners steps down.

The demonstrations have been taking place across Malawi, including the capital, Lilongwe, where streets, property and cars were damaged.

If this woman thinks rightly, she will realise that its high time she resigned. All this is happening because she messed up the elections. We cannot, as a country, suffer because of just one person. The elections were messed up.

President Peter Mutharika narrowly won re-election in the southern African country on May 27.

Opposition parties complained of irregularities including polling station results sheets with sections blotted out or altered with correction fluid.