Kenyan MP ejected from parliament for attending with baby 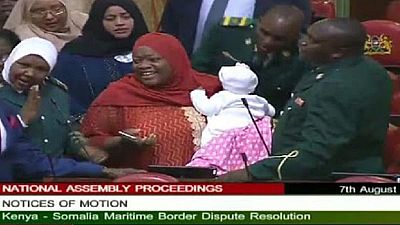 Proceedings in the Kenyan National Assembly was on Wednesday morning halted when a Member of Parliament attempted to participate in proceedings with her five-month-old baby.

MP Zulekha Hassan’s move created a hold-up of quarter of an hour leading the presiding speaker to order that she be escorted out of the chambers by the sergeant-at-arms.

The MP is a Woman Representative for Kwale located in southern Kenya. Women rep seats are a constitutional move aimed at increasing the presence of women in the legislature. There is one representative for each of the 47 counties.

If you are a Member of Parliament who is breastfeeding, in the best interest of that child, the child cannot be separated from you when you are in the course of your duty in the Assembly.

The speaker termed her action as “unprecedented” the Star Newspaper reported. But the speaker’s position was much softer that than of the majority leader who termed the action “out of order” and a “gross misconduct.”

“I have tried really hard not to come with the baby, but today I had an emergency; what was I supposed to do? If parliament had a nursery or a creche I would be able to put my baby there.

“Now as we ask for more women to come into parliament, you need to provide a family friendly atmosphere,” she told reporters outside of the chambers.

The move has divided opinion on social media where a section of Kenyans are berating the sacking whiles others insist it was a needless furore that she had created.

Kenyan Lawmaker Zulekha Hassan was ordered out of Parliament today when she arrived with a baby.
Ms Hassan stated that she did not have a choice due to an emergency & that the issue wld not have arisen if childcare facilities were available at Parliament. pic.twitter.com/iMV1IuoVet

Aden Duale accused the nursing MP of being out of order. “That member must be cited for gross misconduct. We must protect the dignity of the House,” he said claiming such an incident has never occured since independence.

Duale posited that the baby was not a member of the house and proceedings could not be held in its presence but incidentally described the baby as half member.

MP Zulekha however enjoyed the support of most female and some male MPs who were present. One such MP Peter Kaluma (Homa Bay town) argued that she needed not be separated from her baby because of legislative duties.

“If you are a Member of Parliament who is breastfeeding, in the best interest of that child, the child cannot be separated from you when you are in the course of your duty in the Assembly,” Kaluma said.

She was also shielded by another MP Samuel Atandi, who was eventually escorted with her out of the chamber.