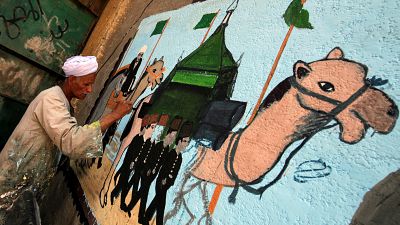 Eid Al Salwaawi, 69, paints murals of the rituals of the hajj pilgrimage on the walls of a house in Cairo’s Sayeda Zainab neighbourhood.

Sometimes he volunteers to paint scenes that celebrate the hadj and religious stories and lessons, other times he is paid.

Salwaawi said the hdaj scenes he saw on the walls of houses in his home village as a child in northern Aswan captured his imagination.

“So I draw camel caravans and soldiers wearing traditional hats guarding them,” he said.

He uses simple tools like a handmade palm frond brush and a mixture of paint, vinegar, rosewater, gum Arabic and glue.

One mural depicts women as they embark on the pilgrimage, dressed in bright colours, another shows a caravan carrying the tapestry that covers the Kaaba, the holiest site in Islam.

He adorns his works with prayers and Koranic verses.

Each mural takes him between two and three hours.

Like every other year, Muslims from around the world are fine-tuning travel preparations to the city of Mecca in Saudi Arabia to complete the hadj, one of the five pillars of their faith. This year’s hadj will conclude on Sunday.