Ethiopia deploys soldiers to take over security in southern region 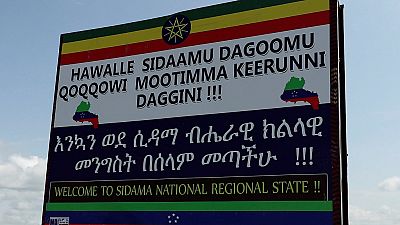 Ethiopia’s government said on Monday it would deploy soldiers and federal police to take over security in a restive southern region following days of violence that has left at least 18 people dead.

“The regular security structure has been unable to ensure rule of law and has been stymied by various agendas,” said a statement read on regional state television late Monday.

“From today onward the southern region will be under a federal security forces-led command post.”

From today onward the southern region will be under a federal security forces-led command post.

The unrest stems from efforts by the Sidama ethnic group, the largest in the southern region, to establish a new semi-autonomous state, a project that has put them on a collision course with the government of Prime Minister Abiy Ahmed.

Protests erupted last week as Sidama activists sought to declare their own territory separate from the diverse Southern Nations, Nationalities, and Peoples’ Region.

Sidama leaders submitted their request last July and were preparing to unilaterally declare their new state last week but instead accepted a government request to delay the move.

Clashes broke out when it became clear that a declaration was not imminent, with violence carrying through the weekend into Monday.

In its statement, the government said security had deteriorated and the southern region was plagued by “strife, destruction, displacement and robberies”.

“Armed and illegal groups have been wreaking havoc in the region and the army has been trying to restore the rule of law,” it said.

It said the federal takeover came at the request of regional officials. Details of a new central command post be made known in coming days, it added.

Ethiopia is already partitioned into nine semi-autonomous regions. The constitution requires the government to organise a referendum for any ethnic group that wants to form a new entity within a year of them requesting it.

Hospital officials in Hawassa, the regional capital, said last Friday that four people were killed in protests there.

Security forces swiftly quelled the unrest but violence in towns outside Hawassa spread.

A hospital official in Woreta Rassa, located about 30 kilometres (18 miles) outside Hawassa, said Monday that 12 people had died after being shot by soldiers late last week.

“Twelve people from the community were killed and 19 were injured,” said the official, who spoke to AFP on condition of anonymity because he was not authorised to reveal casualty totals.

“They were fighting the military.”

In Yirgalem, around 40 kilometres south of Hawassa, two people died out of 10 who were admitted to the local hospital, said Gudura Funte, the hospital’s head.

“One patient was shot at 4:00 am today. He was admitted in the morning and then he died. The rest came on Friday, Saturday and Sunday,” Funte said.

He added that the security situation had largely stabilised by Monday afternoon.

The numbers provided Monday by hospital officials are likely incomplete, as violence was also reported in other areas.

Some Sidama activists have put the death toll as high as 60 but it has not been possible to verify their reports.

Derese Desalegn, the head of the Sidama health department, said he planned to dispatch officials to affected areas on Tuesday to begin gathering comprehensive casualty figures.

At least 150 people had been arrested in connection with the violence as of Friday, Hawassa Mayor Sukare Shuda told regional state media.